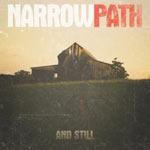 From the state of Indiana comes independent rock band Narrow Path, with their latest composition, And Still. The album is all Narrow Path original recordings, which were mixed and mastered by none other than The Digital Age themselves at Asterisk Sound studio. It's a wise move on the part of Narrow Path, as The Digital Age is not only known for quality musicianship, but also making what they touch sound as best as they can (and they captured Narrow Path's sound perfectly). If you're wondering what you can expect from them before you give And Still a spin, Narrow Path boasts an ambitious and energetic mix of pop rock and southern rock. The music itself of the album's opening track, "Only Hope," sounds like what would happen if Third Day and Too Bad Eugene merged into one band. While some semblance of sounds similar to that can be found throughout the album's length ("Endure," "Restore," "Freedom Is Found"), there are some songs that lean more heavily on the southern sound. "Broken Things" falls into this category, with its twangy guitar riffs and steady, but upbeat, rhythm. Despite the pop and southern aspects, the vocals show traces of 80s glam or power metal influence. Daniel Ross's voice isn't as high or commanding as Michael Sweet (Stryper) or Scott Wenzel (Whitecross), but his voice has a vibrato and tone reminiscent of the bands of those days. As far as Narrow Path's message, it's easy to notice that they have roots as a worship band (as they still serve as worship leaders at their home church). God's might and omnipotence are openly praised, as Ross sings "Our God will make a way, a way out of no way, He can do anything but fail." Then in "Keep Me (Psalm 35)," Ross puts himself into King David's shoes (and also makes the Psalm applicable to his own life), as he sings what is basically a summary of the Psalm. While Ross' lyrics don't tread a lot of new ground - putting the message far over the artistry of lyricism - it's always nice to find worship bands who write their own songs, instead of only relying on covers of current hits. This is the main thing that Narrow Path has going for them. With a stronger focus on lyricism in future releases, Narrow Path could go places. In addition, I would love to hear more of what they offered in the final moments of And Still: amazing guitar work. "The Day Will Come" went for a few minutes sounding like another song to fit in with the album, but the last few minutes turned into an all-out jam session, with the band's rock & roll tendencies taking the reins, including a mind-melting and smile-inducing guitar solo that completely came out of left field. I had to double check to make sure I was listening to the same album. Narrow Path certainly didn't leave their musicianship skills out of this album, but this small portion shows the listener an even stronger side to the band that would really do wonders for their tunes. If you want some worship music with more rock flair (and all-original compositions), Narrow Path's And Still is worth checking out. With all they have to offer, including a lot of potential, you're bound to find something you'll like. - Review date: 1/19/13, written by Scott Fryberger of Jesusfreakhideout.com