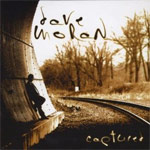 In the vein of 90s artists like Collective Soul, North Carolinian contemporary rock artist Dave Moran has unveiled his latest full-length record, Captured. His press kit mentions being classified as "hook-driven rock and roll," which is true to an extent. A few of the songs on Captured are definitely driving rock music. Opening track "Cardboard" starts with a guitar riff reminiscent of pop punk bands like Too Bad Eugene and Three Cord Wonder. The rest of the song takes its cues from other bands from the same time period like Poor Old Lu and maybe early Foo Fighters. Similar sounds continue through other upbeat tracks like "Captured," "The Weaker Me," "Free" and "Run Away," while also having some Tree63 influence as well. The majority of Captured, though, is down-tempo contemporary Christian songs. There really aren't any of them that stand out amongst the others, as they're all pretty standard, made-for-radio songs. But there are a few issues that need attention before making it to radio, however. First is the production - mainly the volume. The whole album seems really quiet, which drastically takes away from the rock aspects. The second is that if it were to be played on the radio, it would probably be radio from the 1990's. Captured, as a whole, feels like a record that was made in that decade and just now surfaced. So while Moran and band are talented and have the capacity to make some decent tunes, it's hard to be taken seriously when the music screams "outdated." I'd probably have an easier time recommending this album if the guys take some time to catch up.