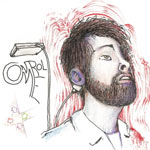 Everything about the works of Jay Tholen is experimental. From the album covers to the themes, straight on down to the music itself. His projects range from albums like The Usurper Must Die!!! ("a nineteen minute avant-pop prog-hop onslaught of righteous rage") to The Great Hylian Revival, which uses music from the Nintendo 64 classic The Legend of Zelda: The Ocarina of Time to compose songs about Jesus. He puts out albums on a fairly regular basis, the latest of which is a full-length experiment entitled Control Me. Upon reading Tholen's own description of the album, you would know precisely what you were in for before even listening. He said he "layered the songs beyond recognition until they became what they are now: schizophrenic heaps of sound. Everything from Shoegaze to Prog Rock to Schmaltzy 50's Pop is emulated beneath layers of manipulated waveforms and vinyl samples." It couldn't be described any better as some songs have so much going on at once that you almost have to wonder if it was actually two different songs that Tholen mashed together. At the same time, the music has its moments of beauty. He uses a lot - a lot - of retro, 8-bit music, and he mixes it together with other instruments, such as ukeleles, drums and keyboards to create weird, albeit crafty, music. At times, they can be a little off-putting, but other times they're fully engaging. Take the next-to-last song "Eagle Feather, Falcon Claw" for instance. A five-part story, it sits within close proximity to eleven minutes in length, but the music plays a big part in the song not feeling needlessly dragged out as some lengthy tracks can feel. Some other highlights (as far as the music is concerned) are "Altars," "Bleeding Over" and the jazzy "I Know." As far as the vocals and lyrics, Tholen reminds me a lot of John Ringhofer of indie act Half-Handed Cloud. Like Ringhofer, Tholen uses minimal lyrics with lots of imagery per song, while singing with a voice that wouldn't make it past the audition phase of American Idol. To his credit, this obviously isn't what he's hoping to attain. It's also nice to hear some electronic music with vocals that aren't completely smothered with auto tune. At the same time, the songs would probably fair better with some smoother vocals instead of the sporadic quasi-melodies and crazy singing. That being said, Tholen is talented, and Control Me is worth a listen. It'd be interesting to hear his previous work and to see where he goes from here. If you want to hear more of his previous work, you can download almost all of his albums for free through his website, jaytholen.net. While you're there, give Control Me a listen. You may just find something to like about it.