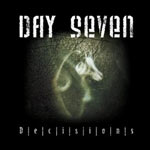 If you're a musician coming out of the state of Georgia, chances are you're either a southern gospel group or a hip hop artist. That is, unless you're Day Seven, then you're a modern rock band trying to get their hope-filled tunes into the hands and hearts of others. They've recently released their first full-length record, Decisions. Musically, the album wastes no time getting into their brand of modern rock music. Decisions has its share of ballads and softer rock songs, but the majority of it is defined by driving guitar lines (including some guitar solos courtesy of lead guitarist Phillip Alexander) with matching bass and some skillful drumming. The music seems like they put a lot of effort into it, though most of the songs seem to be borrowed from other modern rock bands - like Red, Since October, Decyfer Down and more. There are even hints of Collective Soul and a mild, mild dash of Alice In Chains in the song "Expecting Grace." Chad Davis's vocals also follow suit. You can listen to his singing and feel that he's sincere in what he's singing and what he believes in, but it leaves me wishing for more. While his voice is strong, it's also one that would be difficult to pick out in the midst of some other rock voices. Of course, that also means that they're able to hold their ground with other bigger names, and can probably land a major record deal with ease. But with their sound the way it currently is, they may not make any memorable music. I was caught off guard (and pleasantly surprised) to hear some harsh screams in the song "Truth." The majority of the song is normal Day Seven material, but at the end of the song, Davis screams his way through it, and it actually sounds pretty fantastic. We also get a little bit more of those screams in the chorus of "Ante Meridiem," though they're rather quiet and pushed way into the background. They do reappear, more noticeably so, later in the song, again sounding great. Day Seven is a talented band; while Decisions may not display that talent in its fullness, they definitely are capable of writing some amazing music. If I could make a recommendation, I would say to maybe try some harder music that incorporates a lot more screaming. It's in those harder instances that I feel like the album is where it's at its best and the band sounds most comfortable. Until then, we're left with Decisions as a good-but-could-be-better debut from a rock band we'll probably be hearing more from soon.