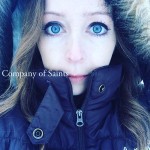 Company of Saints
Face To Face


For almost a decade now, husband/wife duo Mark and Julia Palmer have been spreading the Gospel to Southern California through their music. Operating under the name Company of Saints, the Palmers have been creating music and giving it away for free through their own independent record label, Royal Laundry, as well as through their Bandcamp page. Company of Saints has recently released an EP entitled Programmer, but it was to serve as a follow-up for their full-length album from February, Face To Face. Though Mark and Julia write and record with some organic instruments, Company of Saints is a largely electronic outfit, typically on the quieter side of the spectrum with a lower-BPM, and with Julia serving as the primary vocalist. The music is generally comparable in sound to some of The Echoing Green's slower material, but occasionally, some of the entrancing synth-, piano-, and guitar-driven tracks and hip hop-esque beats remind me of an artist by the name of DJ Okawari. Julia's vocal style is a bit reserved and very breathy. This isn't atypical in the electronic music scene, as artists use vocal samples that sound like this all the time. However, as these aren't samples, and she is singing actual verses and choruses over a twelve-track album, I found myself wondering what she sounds like when she actually sings. Now, it is rather easy to catch glimpses of her actual singing voice from time to time, but I'd honestly love to hear her stretch herself into that realm a little more, and maybe even pull away from the breathy vocals altogether. There are a lot of instances on Face To Face where it would've been great to hear her belt out a little (the chorus of the loud and anthemic "When the Night Falls Down," for example) or provide some sweet and delicate vocals (the tender ballad "Why Would I Sing"). It may even help some of the weaker tracks, like "To You" and "Fly Out Sparrow," which feature particular melodies that really emphasize the exhalation and don't sound as strong as intended. Ultimately, Company of Saints is a talented duo of musicians with plenty of music to dive into. And if you're looking for some new electronic music that lifts up the name of Jesus, you'd do well to investigate their discography.
- Review date: 8/19/17, written by Scott Fryberger of Jesusfreakhideout.com