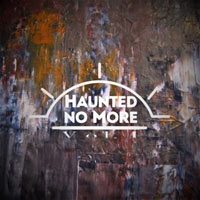 
Bride's Dale Thompson has been a very busy man as of late. His main band released their 14th album, Snake Eyes, last year. His side projects, Dabster Gentlemen and Perpetual Paranoia, released their debuts last year as well. His most recent release is with another side project known as Haunted No More. This duo with Myles Barfield has a sound very befitting of their name. A soft and "haunting" piano serves as the backdrop for the very minimalistic sound provided on Vol. 1. Some bass and lighter drums and percussion also join in from time to time. Dale's vocals are the center point, but the vocals come in many layers to add to the depth. While often more dramatic sounding, the vocals are frequently reminiscent of something you'd hear on a Pink Floyd album. The music itself is a beautiful backdrop. The melancholy piano is strong throughout the entire album from front to back. The vocals can be a strong suit, but at times can work against it some. Some of the vocal tricks executed offer a really cool effect and sound, but at times -- mainly when some of the higher vocals shriek in the background -- they take away from an otherwise beautiful sound.

The idea of the album is to intertwine stories of hurt, pain, and loss with the light of hope. The band has stated that they hope this idea "will all work together to meet the listener in the depths of their darkest torment and let them know they are not alone." The album seems to do just that. While the music is darker in tone and sound, and the lyrics go to darker places, there is always the hope of Christ presented. Both internal journey songs, "I Sleep" and "Filter," along with "The Miracle in You" are good starting places if you want to dip you toe into the waters of Haunted No More. This album won't be for everyone, but those willing to give it a listen will be rewarded with some cool musical moments. The piano alone is worth the price of admission. Fans of Dale Thompson's musical history may also want to check this album out for sure. More than anything, it's nice to see Dale Thompson being this inspired and experimental 33 years after Bride's Show No Mercy released.