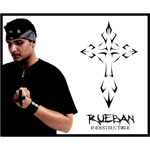 Rueban (Rueban Isaac) is a multi-instrument musician from Hyderabad, India who draws his musical influence from hardcore, punk, thrash, and alternative metal. For his debut solo album, Rueban is a literal one-man-band as he plays guitar, bass, drums, sings, and writes both the music and lyrics. His album, Indestructible, features heavy guitars and a sound similar to that of early nu-metal bands with some hardcore and alternative metal elements thrown in for effect. Overall, the album is enjoyable musically if you are a fan of the genre. Rueban puts together a few slick riffs to get your head banging and proves himself as a capable musician, though at times the drums in the recording are a bit underwhelming. Lyrically, Rueban keeps God at the center of his message and does not shy away from his faith. While there isn't necessarily any profound content, you shouldn't find yourself bored either. On the flip side of the coin, production is an issue. While the clean guitars sound fairly crisp, the heavily distorted guitars come across as muddy; sometimes you aren't able to hear the fullness of the riff being played. Also on the production side of things, the vocal effects used often times feel like too much. While Rueban's vocals are mostly a fit for the heavier material, they suffer with the softer "Rhea." The songs on Indestructible are extremely short (average track time around 2:15) -- Perhaps derived from his hardcore and punk influences. While it would be nice to hear more musical development on some of the tracks, more than anything, it's the overtly abrupt endings that take away from the finished product. Fans of the underground hard/rock and metal scenes are the recommended audience for Rueban. The sound is raw, but it's always good to see someone spreading the love of Christ through song. - Review date: 10/31/13, written by Michael Weaver of Jesusfreakhideout.com