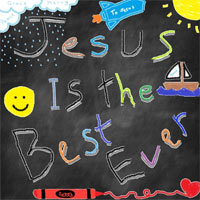 Jonathan Tekell
Jesus is the Best Ever


Jonathan Tekell has retuned after two years with a follow-up to Love Me to Pieces. Like its predecessor, Jesus is the Best Ever is also very eclectic in sound. However, this time, Tekell seems to be a bit more deliberate with his choices and the pieces fit together well. The album opens with the island influenced "Wake," moves to the impressive pop ballad "Stay," then to the electronic "Be Yourself" (think Owl City), and then again to the hip-hop inspired "Give Your Life." Each of these songs are executed well and start the album positively. "Stay" is certainly the best song on the album and "Give Your Life" is a definite improvement over the title track from Love Me to Pieces. The album takes another unexpected turn with the playful Michael Bublé-esque tune "Kid Again" before jumping to the Latin-infused salsa "Dancing For the Lord." Then, later in the album, Tekell switches it up again and goes for an eastern flair in "Running Hard." The most interesting song present has to be the orchestral "Adventure Awaits." While the verses vary in sound, the chorus sounds like it was penned with the help of Danny Elfman and has a really cool vibe.

Jesus is the Best Ever almost plays out like a soundtrack for a movie. There is a baseline sound for the album, but then there are specialized songs as "film's lead travels the world." It's a cool concept when you think about it that way -- and it's not too far off from Tekell's intent behind the album. Tekell says, "Jesus is the Best Ever takes a wild tour through a variety of cultures and influences in the pure and simple-hearted worship of Jesus." The album finds Jonathan Tekell improving across the board: better production, better vocals, and better songwriting. Jesus is the Best Ever may not be for everyone, but it's an interesting journey that offers up some entertaining music. I'd definitely recommend giving the album a listen. When you do, pay close attention to "Stay" -- it's honestly one of my favorite songs of 2020 so far.