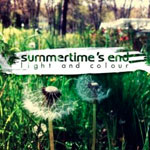 One-man band Summertime's End is the brainchild of Australian singer songwriter Daniel Throssell. He self-released his first album, With Love From Where You're Not, in December of 2010, and recently released his follow up, Light and Colour. He admits that his intent with Summertime's End is to blend the music and lyric stylings of his two favorite artists, Relient K and Owl City (in fact, he mentions their names several times in his bio). The good news about this is that he happens to succeed in his attempts. From the very start of Light and Colour's opening track, "Valentine's Day," it's clear that he's influenced by, and wants to sound like, both of those artists. "Valentine's Day" has a vocal melody very similar to something you might hear from Matt Thiessen, and "There's Room On My Trolley For Two" is almost a spot-on impression of an early Owl City song (if Adam Young himself sang on this song, I would've guessed it was a very early Owl City demo). The bad news is that Light and Colour sounds too much like other artists and leaves an extremely small amount of Throssell's own sound. It's very hard to be taken serious by legitimate music fans if your whole goal in making music is to sound like someone else. Throssell does have a bit of a distinct voice, but even with that being said, he makes attempts to sound more like Thiessen than himself. Now, it's very clear that Throssell is a talented musician; not all of the instruments on Light and Colour are played by him in every song (namely the bass guitar in "The Sunset Conspiracy" and the upbeat pop rock song "Dazzling By Design," as well as some guest vocalists), but most of what you hear is his doing. I would love to hear what he can do when he doesn't focus on sounding like someone else and when he tries to make something that comes from his own mind. He has potential to make something really good, but he'll just perpetually be held back if he continues his pursuit of sounding like an Owl City/Relient K hybrid. If you're a fan of those artists, you'll certainly enjoy Light and Colour, which you can pick up at his Bandcamp in a standard or special edition format (the former of which is offered by Throssell as a free download). - Review date: 4/8/12, written by Scott Fryberger of Jesusfreakhideout.com