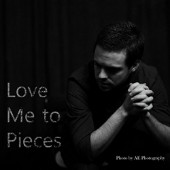 Jonathan Tekell
Love Me to Pieces


Jonathan Tekell is a singer/musician/songwriter with a wide variety of musical influences driving his writing style. Tekell's musicianship dates back to his high school days when he learned a lot of music theory as he progressed. However, God challenged Jonathan with a surgery on his wrist to repair ligaments -- crippling his ability to play music. Tekell channeled his musical gifts into writing music when he could not play; God eventually used this to set up Jonathan's current platform and his album, Love Me to Pieces. Tekell has a rather interesting voice that may take time to grow on some, but I found myself drawn to it from the start. Think of a pop/punk singer doing some more tame acoustic and pop music; at times there are even shades of "Weird Al" in his vocals and melodies. (This is certainly not meant as an insult as I'm a HUGE fan of Mr. Yankovic.) Jillian Tekell, Jonathan's wife, also makes several vocal appearances on the record. Her voice is quite beautiful and blends with his quite nicely.

Most of the album is acoustic (and piano) worship based, but there are some other genres interspersed throughout. "We Leap For Joy" adds in an electro/pop sound to the mix, "Gather My Heart" has a rock and roll feel with overdriven guitars and leads (along with a lot of strings), and the title track is steeped in hip-hop. While stylistically the album is a bit all over the map, the message of each song is cohesive: they are all written to lift the name of Jesus and draw people to Him. Love Me to Pieces is an album that may not speak to everyone's tastes, but there are some truly good songs present. I'd recommend "More Thankful For You," "Playing the Enemy," "Stir Me Up God" (the single version has some cool differences) and "Communion." The Tekell's prayer for the record is simply "that people would meet Jesus in these songs, and that these songs would change people's lives, because when we truly meet Jesus, we can't help but be changed." As a musician, I can't imagine the thoughts Jonathan Tekell had after surgery -- not knowing if he would ever be able to play again. His story is one of perseverance and God's healing powers.