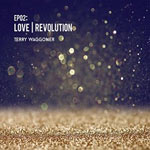 Music is an ever-evolving art form. The moment a genre becomes super-popular, it dies. Years after it dies, there is a revival of the metamorphosed sound. Indie artist Terry Waggoner is an artist who seems to embrace this as he is giving listeners a potluck of revived sounds on his latest release, Love | Revolution. The album opens with the post-pop-punk "Love Will Speak." Lyrically, it is an intimate track asking the Holy Spirit to be made known among the worshipers, but it is musically driven with thumping drums and some aggressive guitar work. This is followed by the more synth/acoustic hybrid, "Love Divine." While lyrically it is somewhat different than its predecessor, they're close to mirroring each other. While extremely long tracks can be daunting, these 2 tracks could have been one song with two movements. "Finally (All Shall Be Well)" is a fantastic heartfelt song of looking to the coming of Christ and the holy wholeness that He will bring. Waggoner's vocals are accompanied very well with beautiful harmonies and gentle instrumentation. But, as with most albums, a good moment can be followed by a not-so-good one. "Better" is without a doubt one of the more difficult tracks to swallow. It suffers from production quality with its bad balance of vocals and instruments. In addition, Waggoner's pronunciation and enunciation is on the extreme side, which doesn't seem to match the rest of the album. Thankfully, the album's flow is quickly picked back up with the sweet "Rebuild." It closes out the album on a beautiful note, with Waggoner singing about the redeeming power of God. The song has a very Crowder-esque feel without becoming a carbon copy. As a bonus track of sorts, the album has a beautiful live reprise of "Finally (All Shall Be Well)." I honestly wish the album carried this sound throughout. This really showcases Waggoner's vocals and sensitive flow. It has a somewhat unplugged sound that would rival Smashing Pumpkins or REM: a wonderful sound to blend with worshipful music. In the end, Waggoner's release is a valiant effort; while it has its flaws, it is very sincere. Love | Revolution suffers from overly simple lyrics and lack of production quality, but with time, Terry Waggoner may pen some songs that could be sung in any church on any given Sunday. - Review date: 1/25/15, written by Ryan Barbee of Jesusfreakhideout.com