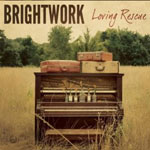 Brightwork is a group of four guys who got together in early 2009 and have been relentlessly playing shows and recording albums ever since. 2010 saw their first official EP, and now they're back a year later with their follow up EP, Loving Rescue. The five songs show a talent for their respective instruments, but they also give off the feeling of "playing it safe." Brightwork's sound is somewhat of a hybrid of Jars of Clay, Nevertheless and MercyMe. While those aren't bad choices of bands to emulate (if you must), they're bands with sounds that people love. So to sound like them is, in a sense, playing it safe. It's rather disheartening; even more so when the band's bio states that they have "a fresh and refined repertoire." Some of the songs also suffer sonically; I think they could've sounded a lot better had they thrown in a bit more guitar to take away from some of the emptiness of the songs. Outside of the music portion, their lyrics aren't the most well-written, but I really do appreciate and respect the message that they portray. They're either worshipping God ("Hope Unchanging") or sending out encouragement to the broken-hearted and hurting ("Yesterdays"). It's hard to start a band with its own identity these days, but it's well worth the fight if you can do it. Brightwork is still a new band, and despite the missteps taken on Loving Rescue, there's a lot of potential in these guys, and they should have a pretty bright future.