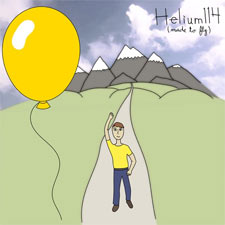 Helium114
Made to Fly


Punk comes in all shapes and sizes, from the seven-piece antics of Showbread to the multi-instrumentalist work of independent artist Luke Greene, professionally known as Helium114. As a solo artist, Greene found himself with total creative freedom on his debut album, Made To Fly, allowing him to experiment to his heart's content. And he took full advantage of that, mixing an old school pop punk sound with a variety of different sounds and styles. The opening two tracks ease the listener in with slower, piano-led tracks that bear a passing resemblance to Mae, as does the short "12/21 (A Response)," but most of the album is upbeat pop punk, with loads of Hellogoodbye-esque synth and driving guitar riffs. There's even a little hardcore and portions of screaming vocals, such as in "SOS" and "Aurora Australis." As far as musicianship goes, Made To Fly is pretty impressive, especially the guitars. Greene seems like quite the accomplished musician, with a pretty solid grasp of pop/pop punk lyricism, too. The songs vary in theme, but are mostly about either romantic love or God's salvation. "Shipwrecked" is a great example of the latter: "This ship is going down / but beneath the waves I know that I won't drown / Davy Jones has claimed the crown / but the final word says that his vote won't count / this ship is going down / but despite the fear I know that I've been found / there's always a way out, so we still haven't fought the final round / currents flow above and beside / waves toss and turn my ship in this heart's deep / but I can feel my anchor holding strong / my eyes still view a world that is so bleak / but joy will be my strength when my heart's weak / and love will keep us though the storm be long / and we be shipwrecked on the shore." There's definitely a lot to like here, but the main drawback is that everything good takes some digging due to the lack of production. Everything sounds muted and muffled, and the vocals could use some touching up. A good producer would take Helium114 a long, long way, especially considering the amount of talent that's still rather easily noticeable.
- Review date: 10/10/21, written by Scott Fryberger of Jesusfreakhideout.com