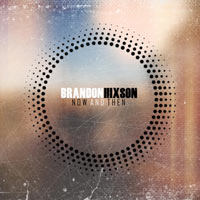 Brandon Hixson
Now and Then

Brandon Hixson is one of those artists who's been around on the scene for a while (in his case, 20 years), has rubbed shoulders with the likes of MercyMe and Third Day, has seven albums under his belt, and yet is not a household name. Hixson, a worship leader from Texas, recently celebrated his 20th year in the industry with Now and Then. This collection is split into two halves: the "Now" side features 5 new tracks, while the "Then" portion highlights five previously released songs with a fresh coat of paint.

Hixson's style relies on a sort of country/pop sound throwing in occasional jazz elements thanks to his skill on the saxophone. One hears that and may imagine the possibilities, but Hixson doesn't lean into it too much for this record. The "Now" half holds songs about the benefits of a life in Christ ("Life With You," "Deepest Scar," and the highlight, "Your Love Lifted Me") and a couple tracks about using that life to the greatest good ("Reflection of the Cross" and the theologically rich "Like There's No Tomorrow"). The tunes are good CCM songs in their own right, though they don't offer much to stand out from most of what's on the radio. The challenge on an album like this, however, is whether or not the new songs stand up well to the older ones.

With that said, the "Then" side is much more eclectic. It starts off with a saxophone-driven dance number ("I Wanna Live (In the Light of Your Love)"), moves in to a steel-guitar laden track ("Someday"), features a haunting orchestral piece ("Hold On to the Dream"), and ends with a tune that feels ripped from the turn of the century ("I Know You're Out There"). Topically, things are less diverse. "I Wanna Live" and "I Surrender" both fall in line with messages from the first half, while the other three tracks deal with death and grief. I'm normally not one to knock a good song about death and grief, but these three threw me off some. "Someday" and "I Know You're Out There" both employ the theology of a person's spirit hanging around a loved one after death; that's more sentimental than biblical. It's one thing to say a person's memory resides in your heart; it's quite another to say their spirit is "out there" and watching over us like an omnipresent angel. You can almost overlook that sentimentality until you hit "Hold On to the Dream," a song about a dead mother's ghost watching her son grow up. It's simultaneously sweet and creepy. Likely this sentimentalism won't bother the target audience, but the topic is so prominent it feels worth mentioning. Otherwise, this B side comes off more interesting sonically, while the maturity of the lyrics is stronger on the A side.

An album like Now and Then can be beneficial for an artist in two ways: 1) it celebrates a milestone and gives longtime fans a glimpse of the future while relishing the past; 2) it can be a good entry point for a new listener to hop on the bandwagon and follow the artist going forward. Hixson's effort will likely delight his older fans while snagging some who enjoy his musical style. Whether or not it highlights his name on the map remains to be seen. The older tracks show fun variety musically, but suffer lyrically while the newer material feels average for the scene without doing much to grab attention. The promise is there, however, and perhaps in the next 20 years Hixson will tap into it.