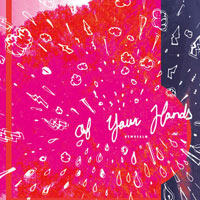 The band newRealm started in Athens, GA while all of the members were attending the University of Georgia in 2012. While playing worship music together for a campus ministry, the group grew together and eventually became the band they are today. It may have been a bit of journey to get to this point, but they have finally released their full-length debut album, Of Your Hands. The band's name has to do with the book of Revelation when John declares, "There will be a new heaven and a new earth," and their mission is to play worship music that has the same depth and beauty of hymns with a modern style. newRealm bring a pop/rock feel to their songs with bits of modern CCM in the mix. The music walks more on the pop side of the line as evidenced by songs like "Invitation" and "New Life," but "War is Won" and "My God" add some more rock elements into the fold -- the latter of these really hinting at their southern roots. Much of the music presented is piano and acoustic guitar based with "Keyholder" being the finest example of blending the two instruments. The band also have a couple of nice guest appearances featured, but the best appearance has to go to Mackalie Davidson's vocals on "Peace Be Still." Davidson has a beautiful voice that matches the mood of the song perfectly. The more surprising guest appearance would be the rap by Dango Forlaine in "Invitation." The album closes on the most pop-centric song, "New Life," complete with auto-tuned vocals throughout.

Overall, Of Your Hands is a really nice album. It sounds good and is produced well, but at times begs for just a little more "oomph." The overdriven guitars on the album, especially on "My God," would have greatly benefited from just a little more volume and presence. The same can be said for the organ in "My God." Instead of absolutely screaming like a B3 should, it remains subdued in the mix and plays as more of a background instrument instead of being featured prominently. Those choices become a little more frustrating when you hear the final track and auto-tune that is so strongly displayed throughout the entire track, as well as the keyboard that stands out more boldly than the organ previously mentioned. Of Your Hands is a good first effort from a new band, but there is still room for improvement. However, newRealm has potential to be much better, and a few different choices in the studio could've made all the difference on their debut release. I'd recommend giving this album a listen and watching out for what they guys do in the future.