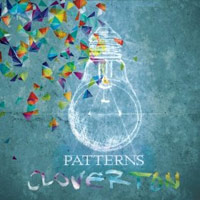 On Patterns, Cloverton blends symphonic sounds with intimate piano and vocals while maintaining an indie sensibility. Vocalist Lance Stafford melds his unique and warm voice with his piano alongside rich strings and synths. That's the basis of Cloverton, then add a great rhythm section and some ambient guitars to form a huge landscape of sounds which all take place on Patterns. The first few tracks on the record have cinematic qualities in the sense that the songs sound huge and epic. The tracks "Bridge" and "Father's Love" are examples of this. "Bridge" could easily be the soundtrack to a love story, whereas "Father's Love" and "Glowing in the Dark" bring a driving and upbeat rhythm from the drums with huge melodic choruses.

The middle section of the album tends to drag. It's almost as if the songs are too "epic" and they tend to leave the listener unsure of where the song is headed. There's a beauty in simplicity and arrangement that's lacking on Patterns. An awesome melody is still an awesome melody whether it's layered with hundreds of instruments or played on an acoustic guitar, and with many of the songs, they lack a depth in melody. Many times during the album, Stafford's delicate voice is lost in the mix and there's a strain involved in trying to hear what's happening vocally. Aside from the vocals, the rest of the instruments sound rather brilliant and rich. The drums are punchy and clear and the strings and synths fade in and out effortlessly. Despite the few dragging tracks and misheard vocals, there are still a few great tracks that standout. "Green Light" is very reminiscent of the song "Yellow" by Coldplay. It's a great spread out song that has wonderful verses that force you to listen to the lyrics. The title track, "Patterns," has a great groove that's embellished with ambient guitars and huge synths during the chorus. The record is an incredible feat weighing in at just over 50 minutes and 13 tracks long and having cost over 45 thousand dollars to produce. The record was crowd-funded, which shows that Cloverton has a lot of support from their fans. But does Patterns 'sound' like 45 thousand dollars? That's debatable.