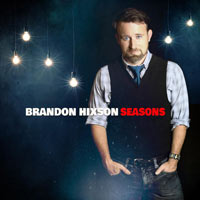 
If you take a minute to read through the professional biography of singer/songwriter Brandon Hixson, you'll find a long string of terrific achievements. From fronting multiple bands to winning music awards to receiving a Master's Degree, Hixson has accomplished much, but his journey in the world of music isn't over. This year, he releases his newest batch of music, in the form of an album titled Seasons. If ever there was an appropriate use for the term "mixed bag," it would be with this album. Seasons features multiple genres, as well as themes and messages with varying depths. Musically, Hixson focuses mostly on contemporary pop, with some country flair on occasion. You'll hear a familiar country twang on the guitars throughout a good portion of the album, as well as some organ and even a banjo on "The Miracle (Mema's Song)." Hixson's vocals don't particularly fit the country sounds, but his voice is solid in its own right. His voice may fit best on the closing track, "Passengers," which breaks away entirely from the rest of the songs and brings us an amalgam of pop rock, electronic, and yacht rock - the latter of the three emphasized by Hixson's terrific saxophone part. It's a song that doesn't really fit on this particular album, but it sounds good and is an interesting addition. As mentioned earlier, the themes of the songs are just as diverse as the sounds. "Passengers" reminds the listener that our time on Earth is short and that we need to make the most of it, "I Won't Be Moved" is an encouraging song about God holding onto us through the storms of life, and "Morning Star of Bethlehem" is a praise song to Jesus, while borrowing the chorus of the Christmas carol "O Come Let Us Adore Him." The heaviest song, though, comes early on in the tracklist. "Autumn Fall (Mama's Song)" is a song sung to Hixson's departed mother; it's a tender song that really displays his love for his mother, and the more emotional listeners will find it easy to empathize with it, even if they haven't experienced the same kind of loss. Seasons is a fine album that showcases artistic diversity while still being radio-friendly and accessible. Fans of artists like Matt Brouwer may end up enjoying this album quite a bit.
- Review date: 10/30/18, written by Scott Fryberger of Jesusfreakhideout.com