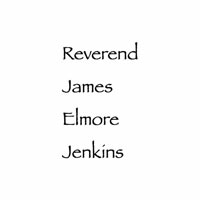 
James Jenkins began his music career in 2003, playing for a couple of different bands over the years before becoming an ordained minister in 2016. Since then, he's ministered in his hometown of Manchester, Tennessee, but now he's back to his music-making habits as well. Even in the midst of a worldwide pandemic, Reverend James Elmore Jenkins released an EP and a full-length album earlier this year, as well as a brand new EP this month called Side A. Jenkins' style is deeply rooted in folk music, with a sort of Bob-Dylan-meets-Gogol-Bordello sound. Lyrically, Jenkins put the Gospel first and foremost, as seen in the songs "Jesus Christ" and "Let My Voice Be Heard." He also touches on social justice; "A Lament" recalls the unfortunate killings of Ahmaud Arbery, Breonna Taylor, and George Floyd while, as the song suggests, lamenting over the lack of justice in the world sometimes (Lord when will such a madness ever cease?"). While the lyrics convey good messages that ultimately seek to bring glory to Jesus, several of the songs do suffer from some repetitiveness and a lack of interesting melodies. That's not to say that Jenkins isn't a talented musician and singer, because these songs demonstrate otherwise. It just seems as if the overall songwriting has some room for growth. If Reverend James Elmore Jenkins is a new name to you and you're generally interested in roots and folk rock, then you may find something to like between his three 2020 releases.
- Review date: 9/11/20, written by Scott Fryberger of Jesusfreakhideout.com

Reverend James Elmore Jenkins · Side A