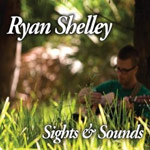 Ryan Shelley's story is a very familiar one to a lot of life-long Christians. He always believed in God's existence, but as a teen, never really gave himself over to Him. Since finally experiencing His love and grace on a personal level, Shelley has taken to music to worship God. Along with four other band members, who sometimes accompany him in a live setting, Shelley has adopted a southern/country style of contemporary music. His second full-length album is titled Sights & Sounds. The album cover alone bears a very big independent feel, and when you jump into the music, it does follow suit - you can tell it's independent. However, that's not to say that the quality is all that bad; the production value isn't super high, but it's satisfactory. What comes as the biggest setback for the album is its lack of creativity. The band seems competent enough to produce good music, but the style just seems a little played out. Sights & Sounds opens with "Awaken Me," which starts off with a country flair, but as it progresses, it gets more and more contemporary. There are some heavier guitars in the midsection of "I Will Wait" that changes things up a litle, and the following track "Come Alive" bears some Third Day resemblances, but the majority is otherwise pretty standard material. Overall, Ryan Shelley's music has some definite potential to be reached in future albums but probably won't be turning many heads with this release.