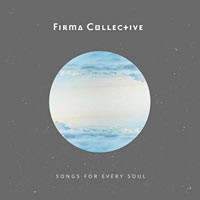 Firma Collective
Songs For Every Soul


Worship acts have it pretty hard. There seems to be a typical trajectory of unforeseen popularity born from a specific sound, and whether or not an artist attempts to leave that pigeon-hole, either leads to unoriginality or failed reinvention. That's why there's always hope when a new group comes onto the scene, particularly when it is led in part by legendary engineer Tom Mgrdichian. Although Firma Collective certainly provides the sonic variety that one would hope for from a debut worship release, Songs For Every Soul mostly feels more like a hodge-podge of singles than a united vision.

A mere list of present instrumentation and styles reveals that there is a lot going on here: hymn "Mercy's Tree" features synths and bagpipes, blues tune "Faithful Lord" utilizes slide guitars and electronic percussion, and so on. It can be said that there is something for everyone here, but that quality makes for an overloaded, conflicted listen. That tension is noticeable even within individual songs - the aforementioned "Faithful Lord" puts off an attitude that doesn't match with the abstract vocal melody in the verse or the uplifting chord progression in the chorus.

Even though a lot of sonic ground is covered, the structure of the songs themselves feels very tired. There are a lot of subdued verses that lead into big choruses that are linked by bridges with builds. The only tune that shakes up this formula really well is the modern rendition of "Be Thou My Vision," which feels more like a continuous build than anything else. It's also supported by an intriguing meter, emotional mood, and a surprising mix of timbres. Still, the rest of the tracks are a lot more forgettable because of it.

It's hard to say that Firma Collective's Songs For Every Soul isn't well-executed. The performances are solid, the production is pristine, and the genre diversity is appreciated. On the other hand, this debut is a perfect release of how over-stuffing can actually take away from the intended impact of music. Every soul is likely to enjoy at least one of these songs, but reining in the ambition would have made this project feel much more cohesive.