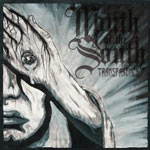 Mouth of the South
Transparency

Indie metalcore act Mouth of the South recently released their newest album, Transparency. Upon first listen, the record is a solid effort. The music and vocals highlight everything expected from the metalcore genre: chugging guitars, beefy breakdowns, tons of double bass, and screaming vocals. However, subsequent listens reveal nothing more. Everything seems to become monotonous and, many times, you'll miss the track change if you're not really paying attention -- and not in a "good flowing album" kind of way. Much of the record runs along at the same pace with the same sound. The first break from same ol' same ol' finally happens halfway into "Epilogue" (Yes, that is track nine of a ten track album). At this point, the song opens up with a slight touch of ambience behind a light guitar strum and is followed by the most passionate vocals present on the entire recording. While this half of the song is hands down the best thing on the album, it leaves you wondering why MOTS choose to ignore this diversity for the first eight songs. The album concludes with a mostly acoustic rendition of the classic hymn "Nothin' But the Blood." The recording has a live open room sound and serves as a nice closer to the 36-minute record. Mouth of the South deliver some precision metalcore at times, but seem scared, or just unwilling, to take any risks that would move them away from the genre's strict formula. When they finally take the much needed risk, it's too little too late. If you just need some new metalcore to put your mitts on, Mouth of the South may be for you, but if you want a little diversity, you should look elsewhere. - Review date: 8/22/13, written by Michael Weaver of Jesusfreakhideout.com