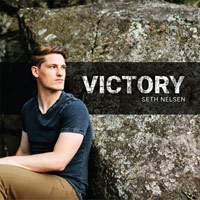 
Seth Nelsen is a worship leader at House Church in Eagan, Minnesota and has had a desire to record an album for many years. Nelsen's goal in writing and recording an album is to reach others across the globe, and not just those in his local congregation. Nelsen had been working on Victory for a few years and finally released the album back in August of this year. Some of Seth's influences include Bethel, Hillsong, United, Housefires, and Jeremy Camp; these influences are evident throughout as you listen, but, thankfully, he doesn't go all-out trying to sound exactly like one of those groups. The album opens with the mid-tempo "Spirit of Joy," but really comes on strong with the faster paced follow-up, and title track, "Victory." The opener is a nice song, but the album would've started much stronger by simply switching the order of the first two tracks. "Hope's Horizon" caps the opening trio as a slower acoustic based song and follows "Victory" nicely. A couple of tracks later is the more popular "Family of God," which picks the pace back up quite a bit. Another interesting track of note is "Can't Get Enough of You." The song is more of a mid-tempo acoustic number, but Nelsen takes a backseat vocally as a female lead sings the entire song. Musically speaking, the guitar lead that opens "Worthy is the Lamb" is likely the most attention grabbing thing on the album. The overdriven guitar part over the slower song with big drums sounds really great and becomes the focal point for the music. After that impressive song, the album finally closes out with "Father of Love."

So many worship albums today use the same formula: Start with a fast song, play several slow songs, hit a mid-tempo near the middle, and close out with several more slow songs -- It's boring and predictable. Thankfully, Seth Nelsen approaches his worship album like a regular album. The tempos change throughout and you never feel like you're bogged down by repetitive slow songs, or stuck in a neverending upbeat rock album. Balance is key and Nelsen hits that area spot-on. Lyrically, the album manages to stay pretty fresh and avoids tons of borrowed lines. Best yet, the songs remain biblically based and spiritually relevant. While Victory is not a groundbreaking achievement in the world of modern worship music, it is a hopeful beacon. Straightforward modern worship albums don't have to follow the same repetitive formula that so many have fallen into. Seth Nelsen has a knack for songwriting and several tracks grab your attention for different reasons. Beyond that, he clearly has a heart for worshiping the Creator and a desire to help others come into His presence through the act of worship. If you're a fan of today's worship music, you should find plenty to like with Seth Nelsen's debut. Try "Victory," "Hopes Horizon," or "Worthy is the Lamb" for starters.