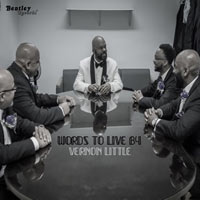 
Ten years ago, hip hop artist Vernon Little released a full-length album, called A New Beginning. Though the album itself isn't easily attainable anymore, most of it still exists on streaming platforms in the form of singles and EPs. A few of the songs, as well as some new remixes, have recently become available as the Words To Live By EP. The opening track is a spoken word introduction that explains Littles reasons for making his music, which leads into the remixes of Words To Live By and Proverbs. Littles style is of the old school hip hop variety, from the flow to the beats. Even the remixes keep that nostalgic, 80s style alive, meshing very well with the final two tracks, which are the original renditions of Good As It Gets and Dealing With Stress. Due to the overall style of the songs, Littles music may not appeal to many outside of a very specific niche. The intro track makes Littles purpose clear, as he speaks on his desire to encourage the listener by rapping about the things hes been through. And he certainly does take an occasion or two to do exactly this, such as in the closing track, Dealing With Stress, where he goes through his life story and through his salvation. But he also spends a disproportionate amount of time on typical hip hop flexing. Good As It Gets is solely about how his rapping skills are as good as it gets, with lots of braggadocious lyrics and even some outdated references. In between a couple of tracks that are full of life advice and calls to salvation, it seems out of place. Words To Live By isnt an EP for everyone, but if youre into hip hop from the 80s and/or 90s, you especially might find something here to like.
- Review date: 4/25/20, Scott Fryberger of Jesusfreakhideout.com