On March 2nd, 2003, a crowd of fans shoved themselves into a compact rundown bar on the streets of Philadelphia to gaze upon the rock wonders of an Cali-bred quartet called Switchfoot. The shaggy blonde-haired frontman Jon Foreman donated some moments of his time for a follow-up interview for the release of their latest project The Beautiful Letdown before dashing off to meet his bandmates for some traditional Philly cheese steaks...
This interview took place on: 3/2/03.

Jon Foreman: Well, that's a good question! The best way to explain it is Sony is a big battleship of a company. It takes a long time to turn it around. It's like parallel parking a Buick. It just takes a little bit longer. But how did we get signed to Columbia? We did a bunch of concerts, basically, for all of these industry guys and they seemed like the best fit for us. John: Really? Cause the album was originally supposed to come out in October, and it was finished... Yeah, I mean a lot of these songs I wrote like three years ago. "24" was written when I was twenty-four. I'm twenty-six now.

Jon: Yeah, I mean I always am writing songs. It's my favorite thing to do. It's like a chipmunk! You kinda store them all up and eat them later! *laughs*

Jon: He's been a friend of mine for a long time. We've known him forever. He called me from the top of this L.A. office building - like the tallest building in L.A. He was a "suit", basically, wearing his tie everyday to work for a week or so. He quit because he couldn't do it. He's like "I gotta get back to music!" He called me and he's like, "Hey Jon! Do you still want a keyboard player?" So I said, "Yeah! Let's do it!"

Jon: I feel like Jerome is a great team player. I mean the same thing where live he just kind of fills in, is the same thing on the album. He's just a wonderful guy to have around. I just feel like he's got really good ideas - he adds them all the time.

Jon: The guitar is my guitar. I bought it at a pawn shop in like North Dakota for thirty bones and the original idea was we were going to break it in half and put it at the bottom of the pool. Well, actually, we were going to light it on fire, but the place wouldn't let us light things on fire, so we were going to break it in half. But then I got too attached to it. As I was playing it, I was like "I can't break this in half!" So we ended up just throwing it at the bottom of the pool. It was in North L.A. Probably North Hollywood. I don't know exactly the location. It was a sketchy hotel where people rented rooms for months, y'know? It was a weird place, but it had a cool looking pool!

Jon: There's twenty four hours in a day. For me, I feel like there are a lot of things inside my heart that are political. I feel like there are a lot of different parties that are vying for decisions on different proposals. And for example, any decision in our lives, whether it's moral or not, there's a million different ways we can respond. I could slap your thing (mini-cassette recorder) out the window or punch you in the face, y'know? *smiles* There's a lot of things I could do right now. And there's all these things bouncing through your head. "24" is about wanting to be united into one person. It talks about that. "Hear, O Israel, the Lord your God is one!" Love the Lord with all your heart, all your strength, all your mind, all of who you are - that's integrity! So that's what "24" is about. John: Cool. And thanks for not hitting this out the window or punching me in the face! *laughs*

Jon: Um... I love that song, but it just didn't fit with the album. We've cut a lot of songs from different albums just depending on whether they fit or not. That was a song that just definitely wasn't happening. Just in the vibe of the whole album. So... yeah, no hard feelings! We're still good friends! *laughs* John: No no, I like the song too, but I actually felt that way when I heard it. Yeah. I could tell it didn't fit... Yeah. But I like that song, it just doesn't really fit with the record. We put it out as a b-side on our 7 inch. So it's available, just not on the album.

Jon: We just felt like that song hadn't lived its shelf life yet. Being signed to Columbia, there's a lot of people who haven't heard that song that will hear it on the new Columbia release. See, that song for us is a defining song and we want people who are just being first introduced to our sound to have that as a part of the experience. Also, after having played it a couple years live, I feel like we've got a better grip of how we want it to be on a record. I wish we had the chance with a couple other songs but that was one that everyone agreed we should do that one again.

Jon: I wrote that with a friend of mine in like five minutes. He was late to catch a train. He's a friend of mine from Canada, he was in L.A. for a couple of weeks. He road the train down to my house to hang out for a day. And we wrote two songs the night before for his project, and actually, this was for his project, too, but we liked it so much we wanted to use it for ours. It was like half an hour before he had to catch his train and we just threw it down and then ran down to the train station and got him on.

Jon: It's been delayed for a long time now and it does exist. We just had our first feature-length documentary come out which is called "Everything to Lose." It's done by E.E. Kennedy, she's a film student at USC. And that's not going to be released to the public, it's going to be tailored to Switchfootage and then that's what everyone's going to see. Hopefully Spring or Summer. But we have all the footage, it's just a matter of narrowing it down now. It's going to come with a short called "Red Tape." It's kinda cool, you'll like it! Is it going to be on just video or DVD, too? It should be on DVD and video, yeah!

Jon: Psalm 103, I'd say. Why? It's a very inclusive psalm. It talks about many different states of mind that we go through as humanity. And for me, it encourages me to keep my head on and focus on what matters.

Jon: Well, that's a complex question... I think from where I'm coming from in my faith, that's an entirely different question than the musician aspect of it, y'know? I think, first of all, to keep your head straight and keep your eyes focused on what matters. That advice I give to everyone. To the musicians, I'd probably say to make sure you enjoy that music is a beautiful and incredible gift to be given. I think so many people, myself included, you're always looking foward to the next big thing, the next big thing. But the next big thing, who knows if it's going to be better than what we're doing now? So take advantage of the fact that you have breath right now. You don't know that you're going to have it tomorrow.

Jon: *laughs* He's cool! John: *laughs* He's cool? Yeah! He's totally cool! What does he look like? *laughs* Um... I can't remember. I think he had curly hair? I can't remember. I'd know if I saw him. I think he's taller than I am, dark hair. Darker, maybe like, that color hair? *points to Kevin's hair* Yeah, we're hoping to finally meet him this summer! Yeah, he's a good guy! He told me he was working with you guys... Wait! It was in Virginia Beach? I don't think so... Was it last night? Friday night, wherever Friday night was... Friday night was um... South Carolina! I met him outside the club, I remember that. Kevin: Was there snow down there? No, no. But it's been getting colder and colder as we go up.

Jon: Disney World? I've been to Disney World, but Disney Land is a lot closer. John: What do you recommend around Disney World? Oh dude, they've got some really cool things down there. I moved from Virginia Beach to California, right? We went through Disney World -- it's not really on the way, but anyways... There were some places where you could go and they've got pools and it's just really relaxing. It's beautiful, it's really nice! Very "Disney," y'know? Very clean, there's no trash laying around. John: No rides you recommend? No, no, it's a family type place.

Jon: Aw man, love each other! Your pride is such a venomous animal and it pops up its head everywhere. You can never kill it, but you can be aware of it and you can beat it down the best you can. That's the most dangerous thing when it comes to love. John: Cool, yeah, cause we hear a lot of discouraging things about marriage. Be afraid! Be fearfully and wonderfully made, y'know? Be ready to take both ends of that.

Jon: No, it just keeps growing! I love Owen Wilson, though! *smiles* 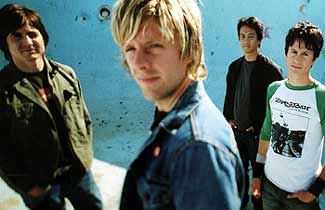