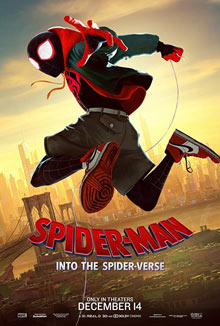 Spider-Man: Into the Spider-Verse

Teen Miles Morales becomes Spider-Man of his reality, crossing his path with five counterparts from other dimensions to stop a threat for all realities. (from IMDB)

With the 2002 big screen debut of Spider-Man, the webbed wonder had swung his way into the hearts of millions. Two sequels, a reboot and its sequel, and another reboot that integrated the character into Marvel's Cinematic Universe later, and we have yet another iteration of the character on the silver screen with the animated feature, Spider-Man: Into the Spider-Verse. Just a year earlier, audiences were treated to Tom Holland's second outing as the character (having been introduced in 2016's Captain America: Civil War), but his first dedicated feature-length venture, Spider-Man: Homecoming. And after seeing him in 2018's Avengers: Infinity War, audiences will get to see his second solo film, Spider-Man: Far From Home in the summer of 2019. So one has to wonder--why in the world do we need yet another Spider-Man film?

The trailers for Spider-Man: Into the Spider-Verse were a little interesting visually, but ultimately underwhelming. A lot of the comedy in the trailers fell flat and felt forced, and the over-saturation of different imaginings of the character all coming together in one film felt like a bit much. So it came as a surprise to this moviegoer when critical and audience reaction alike were positive--but not just postive, we're talking "97%-Fresh-on-Rotten-Tomatoes" positive. The film was widely being considered not only the best Spider-Man film yet, but the best superhero movie of the year--and we're talking about a year that brought us Avengers: Infinity War, Ant-Man and the Wasp, Black Panther, Aquaman and Incredibles 2. So it must be amazing!... right?

I recently revisited all three of Tobey Maguire's Spider-Man films (including a more recent "Editor's Cut" of the much-maligned Spider-Man 3). While I mostly enjoyed those films, they haven't aged real well, but I know they helped pave the way to bigger and better superhero films in the years that followed. Before Holland donned the red spandex, I had grown to really appreciate Andrew Garfield in The Amazing Spider-Man films, even though the sequel suffered some of the same problems that Spider-Man 3 had. 2012's The Amazing Spider-Man was especially more grounded in reality and offered strong acting and a more tangible world for the character to dwell in. (I also rewatched it--after Spider-Verse--and realized just how much I really like Garfield's first film.) Holland's Homecoming was a fun nod to 80's teen comedies and falls somewhere between Maguire's and Garfield's films in tone. I really liked Homecoming after my first viewing, but not quite as much the second time around. Which brings me to Into the Spider-Verse...

Again, I was quite turned-off to Into the Spider-Verse based on the trailers (and the clip at the end of the credits for Venom, which I hated). After nearly countless recommendations to see Into the Spider-Verse, I relented, and honestly, I'm glad I did, although I do still believe it's over-hyped. While the trailer seemed especially frenetic (and not all too appealing), it does showcase its unique animation style, which aims to capture the look and feel of reading a comic book. Into the Spider-Verse ends up being truly stunning to look at, and it's really the film's greatest strength. It even writes out some of the characters' thoughts on the screen, like you would read in a comic book, but the movie ends up being inconsistent in using such a device. Breaking away from having Peter Parker as the film's central hero, Into the Spider-Verse follows, instead, Miles Morales, which gives the franchise a much-needed change of pace (He made his comics debut only 7 years earlier in 2011). While I love Parker, if we're going to be seeing Spider-Man in a movie every year now, it only makes sense to give audiences something different. Spider-Verse makes the bold and ambitious move of uniting nearly every version of the character that's existed over the years--many of which I've never even heard of (like Spider-Ham). The only problem with this is that it doesn't always mesh well. Spider-Verse is, at first, structured like a normal movie with a story that serves as the origin for Miles as Spider-Man, and while I totally get the unique idea of uniting the "Spider-Man's" from different universes, it somewhat distracts from Morales' story--that is, at least, when they introduce 3 Spider-Men too many.

What does work and is most interesting, however, is Morales teaming up with the down-on-his-luck Peter B. Parker, and Spider-Woman (AKA Gwen Stacy, or Spider-Gwen). Parker's mentoring of Morales offers some of the film's best content (even though, while that scene from the end of Venom plays 100% better recut and within the context of this film, it still feels over-the-top and silly here). And when Gwen enters the mix, it feels natural and just has the kind of satisfying result you get from adding a little extra chocolate chips to that tasty cookie dough batter. However, it starts to feel like too much once we get three more lesser-known Spider-Man's: Spider-Ham, Spider-Man Noir, and Peni Parker (not to mention a tougher, tech savvy Aunt May?). I did enjoy Spider-Man Noir (surprisingly voiced by Nicolas Cage) to a degree, but there wasn't much about these extra characters to care about, and since they feel more like running jokes, they greatly altered the tone and weight of the film--for me, at least. I have to admit, though, that almost everything that seemed too goofy from the trailers played a lot better within the context of the film, and I kept thinking--while watching the movie--that they could have used much better footage from the film to sell it better (although, I guess that wouldn't matter much, given its eventual success).

Some other things that irked me were a couple plot elements, like the flimsy way the film paints (no pun intended) how Miles got his powers. It makes little sense as to why it would happen at all, but differs from the comic book origin in an effort to conceal a plot twist those not familiar with the source material would see coming (like this guy...). Also, the excuse for why Gwen is in Miles' world when she is feels like lazy writing... but I have to admit that nitpicks like these (and the excess of Spider-Man characters) only seemed to irk me more in the midst of the otherworldly praise the film has received.

The content is much more reserved than any previous Spider-Man film. There's nearly no profanity--save for a single use each of "cr*p" and "h*ll"--with the only other content being the violence. The Prowler may offer the movie's most intense scenes for viewers, as he's quite scary, especially with his long claws and glowing eyes (and the fact he's almost always lurking in the shadows). Kingpin is almost equally as menacing--especially when he kills a significant character just off screen, proving that no one is truly safe in this film. My 8-year-old son loves the character of Spider-Man, but I don't think he'd do too well with the more intense scenes in this movie. There are some great themes covered in the movie, involving family and even marriage, which bring the movie a lot of heart and emotion. In a way, the film is just as much for older kids as it is for the parents that would bring them. (There's also a sequence involving Miles vandalizing public places with graffiti which may not be something parents of impressionable kids will want to show their young ones.)

For this moviegoer, and fan of the web-slinging hero, Spider-Man: Into the Spider-Verse is far better than I could originally imagine, but nowhere reaches the echelon that some critics and fans have placed the film at (And I'm hesitant to even consider it among the very best movies of the year). It's a solid superhero film and wonderfully animated picture that offers plenty of eye candy and something fresh for the genre, and I'm definitely on board should they offer more adventures for Miles and his friends in the future. (And definitely stay till after the credits have finished rolling to not miss a great, fun additional scene at the end!)

Sex/Nudity: Mile's uncle talks to him about having "game" when it comes to talking to girls, and tries to teach him how to win them over by placing his hand on their shoulder and sensually saying "Hey..."

Blood/Gore: We see some blood on Peter Parker's beaten up face; Kingpin has a little blood coming from his nose; Peter B. Parker has bruises on his face and briefly looks quite beaten up.

Violence: A man is shot from a distance and we see him lying on the ground as he dies; A character is wounded and Kingpin stands over him before hitting him really hard with his fists--off-screen--which kills him; We learn that Kingpin's family died in a car accident, and we see the accident happen, but it's not explicit; Kingpin, Doc Ock, Prowler and Green Goblin all fight the various Spider-Man characters; A robot is "killed," which becomes an emotional moment. And lots of other animated (and some slapstick) comic book violence. Disclaimer: All reviews are based solely on the opinions of the reviewer. Most reviews are rated on how the reviewer enjoyed the film overall, not exclusively on content. However, if the content really affects the reviewer's opinion and experience of the film, it will definitely affect the reviewer's overall rating.