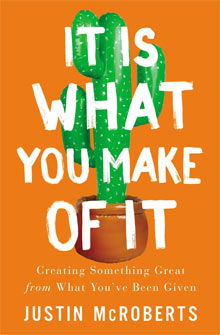 Justin McRoberts
It Is What You Make of It: Creating Something Great from What You've Been Given

When it comes to people who do it all creatively, Justin McRoberts is among that crowd. Getting a start in the Christian music industry, he has since expanded his output to writing books, being a pastor, hosting a podcast, and coaching artists. Given those pastoral and coaching elements, it makes sense why his latest book is called It Is What You Make of It: Creating Something Great from What You've Been Given. This self-help type work is filled to the brim with positivity, quirky stories, and plenty of pointers on how to look at life from a different angle.

The structure of the book is fairly straightforward; there are 14 chapters, each with their own highlighted story and main point. The stories can range from the humorous (like encountering a teacher who keeps an inflatable cactus in his cabinet) to somber (such as moments of falling out with friends). Telling lots of stories in order to prove a point is a common technique today, but it often muddles the point when your brain has to keep straight just what the stories are metaphors for. McRoberts' style, though, works better since each chapter has only one story to focus on. This gives the book less of a "self-help" feel and adds in a sort of short story element. He also spends so much time with whatever anecdote he's relating that the point sticks with the story. For instance, I will probably always remember the connection behind the inflatable cactus narrative.

The lessons themselves are very encouraging and McRoberts' positivity is infectious. The overall point conveyed is that we shouldn't just settle for the mindset "it is what it is." When friendships break or dreams don't pan out the way we thought, instead of growing depressed about it, we should try to figure out what God is allowing us to do with it. Personally, having recently bought a house with lots of problems, McRoberts' book has helped me keep an upbeat perspective whenever a new leak is discovered or something breaks. The points themselves, while helpful, feel more "power of positive thinking" than rooted in the Bible. He does use Bible verses and is clearly coming from a Christian worldview, but most of the time the stories are what drive the points more than a thorough Bible study. This isn't necessarily a bad thing--nor does it negate what he's saying--but the lessons do feel more fluffy than weighty at times.

Still, It Is What You Make of It is a quick and easy read that, given some time and thought, can influence how you see the world. McRoberts is witty, fun, and positive, and his pastor's heart is clearly seen. If you feel you are more of a pessimist, or struggle with where your pursuits are going, this book could be a helpful resource. It may not be the deepest work on the subject, but its simplicity is potent enough to where its effect could linger longer than any memory of the book.