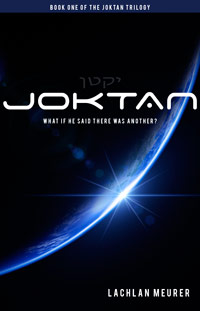 The Christian science fiction scene has witnessed a resurgence of popularity in recent years, with the field spearheaded and fathered by authors such as Stephen Lawhead, Frank Peretti, and C.S. Lewis. Many new and upcoming writers try their hands at science fiction, playing with other worlds and realms and ideas, such as time travel, multiverse and interstellar travel. As Christians, any creative field in the secular realm should be ours for the exploring. Lachlan Meurer proves to be part of this exploration team with his novel Joktan.

The story follows Cooper Grace during a night camping trip with three of his closest friends. After losing a card game, Cooper must take the bet and skinny dip in the lake, where he encounters not only a floating corpse, but a glowing blue orb as well. His friends drag the corpse out of the water, and when Cooper touches the orb, a flash of light bursts into the night, sending him flying across the galaxy to another planet: Joktan. On the other side of his transportation, Cooper stumbles out of a lake and finds a cabin stocked with food and clothing and a place to sleep. He wanders for a bit, and then meets Ragan, who becomes a major player in the story. The Joktan native helps Cooper adjust and figure out how to get back home. If he can, that is.

While transportation may be used as a plot device, Meurer uses it here to try and kickstart a story that never quite finds its footing. Cooper constantly talks about his wife and friends back home without any of his longing ultimately coming to fruition, and dialogue constitutes most of the manuscript. Now, most stories involving many characters should and do involve more dialogue than petty description, infodumping, and blatant giving of history. Meurer manages to balance all of these while somehow avoiding to build a concrete plot. Cooper talks to Ragan; Ragan and Cooper travel and find that other Earthlings have been to Joktan; some semi-revelations are made; then Cooper somehow figures out the correlation of how long it will take the portal to open by juxtaposing Earth years versus Joktan years. The rest of the plot consists of people talking and discussing things. The frankness of real human needs and conversational topics is admirable; however, the bald apparentness of lacking a concrete purpose for Cooper being on Joktan diminishes the dialogue when viewed from any angle.

The plot suffered, yes, but I note the admirable efforts to create characters with whom the reader can connect. Cooper seems like a one-of-the-guys kind of guy, and he helps Ragan develop his sense of humor a little more. Later, we see characters like Tarla, who appears compassionate and caring enough; that, unfortunately, looks like the layer Meurer stuck with throughout the novel. And we see characters like Jojy, the curious and jovial overweight friend who (conveniently for the plot later on) works in the medical profession. The characters, while not quite cardboard, were not quite flesh yet either.

One noticeable flaw outside of story parameters happened to be the formatting and grammar. Some dialogue tags were omitted completely, while other snippets ran into other characters' speech paragraphs, making the exchanges fairly confusing at times.

Science fiction still has no boundaries, and worlds always make sense for those suspending disbelief when the world makes sense within its own building, rules, and plot. Joktan needed more of all three. The more characters become their own people, per se, the more the story will develop and become full-bodied, and in his next venture, readers may very well see Meurer writing in just that manner. Until then, however, readers must plunge through the first Joktan trilogy book and hope for a tastier morsel in the next course.