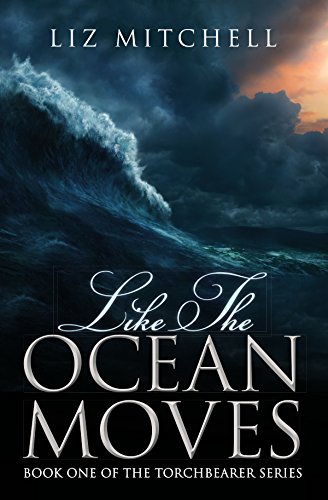 Sometimes, before stepping outside of one's comfort zone, it takes a little nudge in that direction. A published poet and author of short stories, Liz Mitchell attended a prayer conference in Nashville where she felt called to venture into deeper storytelling. Diving into the world of the novel, Mitchell created the idea for The Torchbearer Series, with the first entry, Like The Ocean Moves, releasing back in July.

I've always been the type of reader that has a hard time jumping into a new novel, especially when it's the first in a series. Even if I think the story will be good, I occasionally find myself dreading having to get to know a bunch of new people in a new place and having no idea as to what's going to happen or even if it's set in our world or some fictitious universe with different rules. Like The Ocean Moves starts with the briefest of introductions for our main character, Amy McEwan, an elementary school teacher and mother of a son named Jonas. We aren't given much time to get to know her, though, before the catalyst of this adventure comes into play: Amy's next door neighbors' little girl, Katey, has been kidnapped. On top of that, Amy could've prevented it if she hadn't declined Jonas' request to give his best friend a ride to school. The obvious guilt this realization brings, accompanied by her soon-thereafter revealed backstory, aids the reader in developing sympathy. The author explores Amy's childhood in a church she wasn't particularly thrilled by, as well as her issues with trusting men, which comes into play at the introducion of the secondary character, police officer and part-time pastor John Yates, who also comes with a tragic backstory involving the loss of a wife and unborn child. While these are pretty common stories, they do play an important role in the further development of the characters, instead of just giving the reader a reason to like them.

In the midst of the investigation of Katey's disappearance, and encouraged by John's faith, Amy spends an evening calling out to God, when her prayers are answered in a way she could've never expected, even if she was the holiest of saints: a portal to Heaven itself opens, and an angel steps through. Not only does this angel introduce herself as Amy's lifelong guardian angel, but she's there to bring her into Heaven - yes, the actual Heaven, although it's only for a short time, as God has a very specific mission for them. From here, the story heavily revolves around the idea of God's constant intercession in our lives, as Amy, John, and Jonas team up with an army of angels to rescue Katey and bring down the organization responsible for her kidnapping.

I hate to give out any more spoilers than I already have, but I'd be remiss if I didn't mention that the plot line gets very heavy thematically. It deals with a real-world issue and a very dark industry, and, at times, some of the scenes in this book can be disturbing. I'd even go so far as to recommend that anyone with a history of having been sexually abused proceed with extreme caution. Admirably, the author does tackle the topic with a great deal of sensitivity in describing what's occurring in some of the darker scenes, though I do wonder if the amount of time spent on the subject could've been lessened. Perhaps the intent was to cause enough discomfort in readers to make them wonder what one could do to get involved in bringing sex trafficking to an end. Regardless, be advised that some sections can be difficult to read.

Critiques are few and almost entirely just this reviewer's opinion. Most importantly, I was a little surprised by the use of a rather vulgar term for a man's genitals. The word is used by a very evil man, and it does sound like something this sort of person would say. The man is threatening another man and a woman, asking for information from the man, who refuses to give it to him. The evil character then says that if he won't speak, he'll get what he wants from the woman, though it will be "difficult to speak with my c**k down her throat." Though it makes sense contextually, it probably could've been left out. Additionally, the notion of human military members becoming soldiers in God's Heavenly army is questionable theology at best, though the foreword of the book does pay special thanks to a fallen soldier that made a big impact on the author's life, so it's more of a tribute than anything. Other than these two things, my critiques are innocuous, like the types of names the author gave to the angels (Harbor, Ruckus, Shake) or the way the author italicizes certain brand names or characters (like Batman or Minnie Mouse).

Like The Ocean Moves is a story of man's fallen nature, and the dark, lost, and seemingly forgotten places that nature leads us. It's also a story of redemption, and God's willingness to go out of His way to save us all. It's based on reality, though, where not everything is perfect, and not everybody makes it. If you're looking for a God's Not Dead kind of story where the bad people who hate God end up getting saved in the end, this book is not for you. If you want an exciting adventure that displays both God's love and justice, while jumping between the natural and spiritual realms, where the protagonists fight against the principalities and the forces of darkness, you just might find a lot to like about Like The Ocean Moves. I, for one, will gladly jump into the inevitable second installment of The Torchbearer Series.