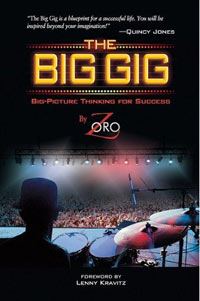 When you hear the name Zoro you more than likely think of the book, television and movie character created by Johnston McCulley, Zorro. But Zoro with one R is a very real and very talented musician. If you've heard of musical acts such as Lenny Kravitz, Bobby Brown, New Edition, or Sean Lennon--to name only a few--then you have probably heard "The Minister of Groove" and didn't even realize it. Zoro is an independent musician who has played drums for these successful acts as well as many more. The Big Gig: Big Picture Thinking for Success is a book that Zoro says has been in the works for thirty years. The question of whether or not the book was worth the wait is a resounding "yes."

Zoro has written a book that is geared to help those interested in becoming independent musicians make their way. What he has created with this project is a handbook that will help any musician blaze their own trail to success in the music industry. Zoro states up front that the book isn't for bands, as too many factors weigh on success for a band, but for individuals looking to make it in a tough industry as "hired guns" for the stars. While the book is written from a musical perspective, the book is also a guide to becoming successful in life in general.

The foreword was written by Lenny Kravitz, who also knows a thing or two about being a successful musician, and tells the tale of how he and Zoro met. It is an entertaining story in which Kravitz pays Zoro extremely high respect. Before the book even started I was almost in tears. As I read the opening two paragraphs of the acknowledgements, I was blown away. The love and passion Zoro spoke about his God and his family was overwhelming and very moving. Zoro maintains that passion throughout the entire book, making his love for music undeniable.

After acknowledging those who helped pave the way for him, Zoro gets right down to business: Helping you become a successful independent musician. At no point does Zoro claim that his book is the end-all-be-all, nor does he guarantee success. He simply claims that the book has insight and inside information to the music industry, normally not available or made known, that will help guide your way and give you a fighting chance. Zoro also constantly warns that being a successful independent musician is a way to make a good living for yourself, but not the path to becoming an extremely wealthy star. He reminds the reader throughout that independent musicians are solely background to the artist.

The book itself is a great read. It is easy to follow and a worthy read for one looking to make their way in the music industry or one looking for some advice and motivation on living life to the fullest. The book is also full of bonus content. Each chapter, as well as in a few other sections, contains a QR (Quick Response) Code. These codes are easily scanned by a smart phone and contain content from Zoro speaking and expounding further on his writing, or videos of live performances. Don't have a smart phone? No worries. Each QR Code is tagged with a web-link making access on your home PC a breeze. Though the book isn't a "Christian" book per say, Zoro speaks freely about his faith and claims that you cannot have truly fulfilling success in life or music without a faith in God.

Zoro is one of the world's best and most respected drummers. He has been voted number one by Modern Drummer magazine several times and has received awards from other drummer magazines like, Drum! As for now, he is focused on his ministry and doing Christian motivational speeches. If you are looking to cut your teeth and make your way in the music industry, do yourself a favor and read what this extremely talented musician and man of God has to say. Even if you are just a musician with no aspirations for any success musically, or just a person without a pinch of musical talent in your body, I still recommend reading this one. I believe you will be quite impressed with what Zoro, the drummer, has to say. Plus, you may just pick up some advice that will help make your life seem more meaningful.