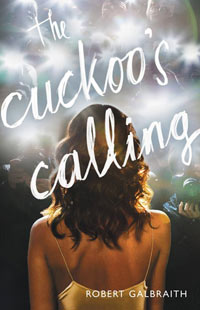 Mystery novels have a specific flare to them that is unique depending on the nationality of the author. For instance, James Patterson's novels have a distinctly American feel to them, whereas Agatha Christie's and Colin Dexter's yarns weave an entirely different British taste and technique. Here's the contrast: American mysteries wrap up with obvious clues that can be guessed at and figured out, snappish. British mysteries twist you around so often, you land on your head and think the sky is the ground, and by the time you've figured out you were entirely wrong, you've been spun around in every direction possible until you saw every clue and dismissed them. Then comes the "I SHOULD HAVE SEEN IT!" Because, all along it was obvious, but you discounted the simplicity of the situation due to red herrings and such. Robert Galbraith's The Cuckoo's Calling tried to incorporate the two, whether he meant it or not. The result can be felt throughout the novel.

The novel opens with supermodel Lula Landry taking a dive off her third-story balcony. The result, as guessed, is her untimely and unexpected death. Media and press have a heyday, and after three months, Landry's brother consults our protagonist--Cormoran Strike, private eye--to sort out his hypothesis: Lula didn't jump, she was pushed to her death by a murderer. From here on out, we have Strike and his assistant, Robin, investigating and drawing us closer and closer to the end.

Galbraith's plot works as a generic kind of mystery, but the execution carried out as clunky and far, far overdone. Subplot after subplot is introduced, and we're left faltering, trying to read and remember everything put before us and sort through what's important to the story. Unfortunately, hardly any of the excess information is important. One could argue that it is because it tells of the characters' pasts or their current lives, but one would be wrong. Information is only important if it's relevant to the plot as a whole and to the progression of the story. If it clogs up the freeway, it needs to be deleted and forgotten. That being said, some of the far more important things, such as Robin's fiancé, could have been very good for the story. And they were not used, leaving us wanting far more conflict than was given us.

Speaking of Robin and Strike, they were good characters at the beginning. And they stayed good characters until the end. Let me elaborate for a moment: Strike was a good character, but by the end of the book, he could have been an amazing character. He stayed "good" throughout the entire thing. Sure, the cast of characters is large, but the ones who should have developed, didn't. We were given one-dimensional caricatures that stayed thus. This hinders the story greatly in the sense that when seen, any reader will suffer great irritation that nothing is changing. The subplots could have brought conflict, because only conflict makes characters change. We get neither.

The stumbling block everything in this story tripped over was the writing. To begin, the overuse of commas and semicolons breaks up sentences into lines of hieroglyphs nearly impossible to decipher. Amid these behemoth punctuation parties lay words that have no business being where they are. Not words that make zero sense, but vocabulary so large, that it does not define the sentence more clearly and instead makes one pause and think, "Why? Why would a smaller word not have sufficed?" The answer is, "A smaller word would have sufficed." Robert Galbraith seems to think otherwise, which causes distracting, clumsy, clunky writing. This misdemeanor is incredibly apparent in the fact that we are told everything instead of being shown to cut out far-too formal dialogue and court-transcript-dry conversations.

A huge problem I found with The Cuckoo's Calling is that, in the very description of the book itself, we are told that "The case plunges Strike into the world of multimillionaire beauties, rock-star boyfriends, and desperate designers, and it introduces him to every variety of pleasure, enticement, seduction, and delusion known to man" (Goodreads). This description, in basic essence, is a lie. Neither Strike nor Robin ever plunge into anything. They visit a designer boutique and talk to one designer, and one filmmaker. That's it. Other than that, we're given nothing more than unresolved conflicts (like Strike's break-up and daddy issues) and absolutely no clues until the last sixth of the book; even then the clues are so indistinct, you have no idea what's going on, and when Strike gives the tell at the end of the novel, I sat there saying, "What? Thatnever happened." Or, at least, we were never told, and therefore had no idea that it happened.

Violence in The Cuckoo's Calling includes Lula's murder and a fight at the end of the book; domestic abuse is mentioned and used as blackmail; Strike receives death threats from collectors. Alcohol is prevalent, and Strike gets drunk once. Drugs like cocaine and heroin are mentioned, but only cigarettes are shown to be smoked. Sexuality includes allusion to Strike sleeping with a model. Profanity is needlessly prevalent, and should seven-eighths of it be cut out, the novel would be that much better for the sheer fact of reading flow.

The Cuckoo's Calling had a great potential to be a massive success--not money-wise, but for the story and the sheer fact that the author has done amazing things before. Don't Google it; I'll just say it. "Robert Galbraith" is the penname of J.K. Rowling. It's rather unfair that people buy books simply for the name attached and give next to zero consideration for the content inside. The Cuckoo's Calling comes nowhere close the writing quality of her previous work. I love mystery, and the suspense always gets me. However, this book's sheer clunk killed any suspense and gave us no hope that it would continue otherwise. Contrary to popular belief, writing mysteries is a science. And when you mess with that science, when you break the rules to the point where it's no longer personal style but ripping apart grammar itselfwell, that's when you get something like The Cuckoo's Calling. That's when you get overhyped stories attached to names. And that's when people demand quality once more.