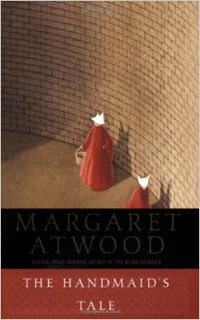 Speculative fiction may be defined as an author's take on the world we live in should society, as a whole, continue down (or start down) a certain path. As an English Major, I find myself stewing over The Handmaid's Tale by Margaret Atwood for several reasons, none of which I find exactly able to be pinned, but which provoke my mind's gears into whirling beyond possible control. This is exactly what a good novel should do, even when the answers are handed to us on the proverbial silver platter.

The Handmaid's Tale starts on a very eerie note: Our protagonist, Offred, describes to us the gymnasium in which she and some other women currently are being forced to live in. The reader senses that somewhere in the back of Offred's mind, she remembers a time before the dystopia she finds herself in, and we get those snippets later in the novel as well. The story develops so that we discover that America has devolved into a society so twisted by misinterpreted Scriptures-yes, from the Holy Bible-that the sterility problem the nation faces has been met with one solution: Handmaids. That is, women like Offred, who have been proven to be "fruitful", are sent to the homes of high-ranking men in order that they may sleep with them once a month in hopes of a pregnancy. However, we also discover that women--all women--have been demoted socially to the point of becoming objects, things to procreate with, disposable beings meant for childbearing and little, if nothing, else.

Offred lives in what is, in our world, Boston. She now knows it as Gilead despite having been born and raised there, and the veil she is forced to wear every day does nothing to contain her memories of the life before Gilead. America, as I've noted, has devolved; extreme religion rules the country, and no one is allowed to read the Bible except the men in charge. Christian denominations have risen up against this theocracy--including Baptists and Quakers--and though the fight against such religious totalitarianism is noteworthy, Offred's oppressed life and restricted sense of humanity is the story that we are given, all the way up to the point when she fears her illegal actions have been discovered by the government.

When it comes to writing characters, Margaret Atwood is a genius. She builds every character we meet--directly or briefly mentioned--in such a way that they're absolutely, irrefutably real. I loved watching every person come to life in my mind, taking on human dimensions that really made the eerie overtones of this very-possible dystopia crawl under my skin and wriggle there until I'd finished reading. Offred, pained and conflicted as she was, represented a tangible example of what a normal person living in such a society would actually be like. Some dystopias attempt to spoon-feed the reader by making the character brave, or noble, or good, or far too flawed to be believable as a hero or relatable character or anything, period. Offred made me feel every pain and twinge and flaw, yet at the same moment, I was able to put myself in her shoes and struggle with what I would do in that situation. And I mourned for the loss of the idea of love that smothered everyone in Gilead.

While this character development is massive and commendable on every level, the world-building and plot definitely needed some tweaking. Some moments in the book could have been expanded on and given a more concrete foundation. For instance, Offred wants to know news of the rebellion from all over the nation, but we're never given a solid reason as to why. One could argue that the driving force of this desire is the return of some sort of normalcy to her life. However, that argument falls flat when one considers the extraordinary lengths Offred goes to in obtaining this news, even as asking her shopping companion when neither of them are supposed to speak to the other. This news got thrown into the plot at random moments and just felt soggy in delivery; if Atwood had gone in and fleshed out this news with a little more history as to what really happened in Washington DC when the revolts started, the dystopia--subtle and eerie as it is--would have taken a new level of urgency, of danger, of beware-of-black-clouds-overhead.

Another point I had a hard time with was the forced procreation. My problem lay not with the idea, but with the execution. I understand that in dystopic societies, high-ranking anyone would get the best of everything. However, if America is trying to repopulate, using older men, who are very possibly sterile if they have produced nothing so far, is a bad call and should have been considered far before the beginning of this novel. Younger men would have been the wisest and most efficient choice in the matter, yet we are given something highly illogical on which to suspend our disbelief.

As I read, I noted that every single Scripture used against women and against freedom were pulled out of context, and even Offred recognized that something was wrong. I have heard that the entirety of The Handmaid's Tale is one behemoth argument against Christianity, and I'll be honest here: I forsook my objectivity as I read so I could sniff out any skewers through the heart of our faith. I found none. There even comes an entire two-page passage in which Offred fervently cries out to God, pouring out her heart and everything on her mind to Him. The forced procreation is a twisted form of manipulation by the government in an attempt to save the nation, however feeble it is. God is present throughout the entire book, though not skewered and condemned as some would like to argue.

The novel does contain sex scenes (non-Fifty-Shades style, mind you), due to the fact that it is a society in which women are objectified into walking fertility factories. Alcohol is present a few times, and the Commander gets drunk once; Offred remembers her mother being drunk a few times in using the alcohol to forget things. Profanity is present as well, sometimes using the Lord's name in vain. Violence comes up only a couple of times, particularly at the end of the novel when tensions rise in Gilead.

The controversies arising over Atwood's speculative work fail to delve into the three-dimensional problems presented to us on one-dimensional paper; I do not claim to have the answer to these controversies. What I do know, however, is that The Handmaid's Tale made this reader speculate without asking questions that hurt the integrity of the book itself.