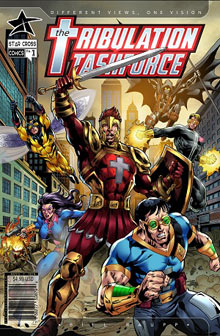 The superhero genre is having a golden age currently with the medium expanding beyond comic books to conquer TV and movie screens as well (not to mention video games, too). It stands to reason, with a genre so popular, that Christian artists would want to give their spin on it. Entering into that realm is Tribulation TaskForce, a creation by Bill Raupp. The first issue introduces a team of Christian superheroes breaking into the Vatican in order to rescue the Apostle John, who's still alive after all these years. The eventual storyline will expand into this team, led by a hero with portal abilities named Grok, trying to prevent an evil group known as the Watchers from starting the tribulation prematurely.

As far as stories go, it's a weird one, which seems pretty on par with comic books in general. There are aspects of the concept that are intriguing. Instead of bringing on the tribulation, the Christians are trying to prevent it; the Apostle John has been kept alive through the years, instead of dying at the end of the first century. Rather than some generic corporation standing in as the front for evil, the Catholic Church fills that role. The execution of the story (at least in the first issue) is mostly well done. There's plenty of action, though the way the narrative jumps around can be jarring at times. Little threads are laid out to entice the reader to want to continue the journey. There's plenty of cheese here, too, from dialogue to hero names (Bzzt is an actual title for one character). It may not be particularly subtle or nuanced, but if you want superhero fun with Christians taking the main roles, this should please you.

Story is only half the battle with comics, though. The artwork is also very important in conveying the plot and Tribulation TaskForce presents itself in a way that feels on a level with Marvel or DC. Clearly Raupp and co. are shooting to compete with the big names. Not only does the art feel modern, but plenty of "hero shots" and unique panel formats are used to keep things interesting. The biggest surprise is how the female heroes and villains are portrayed. One might expect modest outfits that maybe emphasize armor for the women in the issue, but they are given skin-tight uniforms, as well as the men. There's also some mild blood seen during some of the main battle. Overall, this book pushes a PG-13 rating.

What if you took elements of the Left Behind series and mixed them in with the Avengers? The result would look like Tribulation TaskForce. It's a competent first issue that is already spilling over into a wider universe. There's enough intrigue to encourage reading into the next issue, and the artwork would be enough to entice even the stuffiest of superhero fans. But is it worth the investment? That depends on what you're looking for. Do you need a comic book that is based on Christianity and features superheroes? Do you want it to be slightly edgier than similar things that have come before? Then Tribulation TaskForce is worth checking out for one issue at least. Who knows, it may draw you in to keep reading.