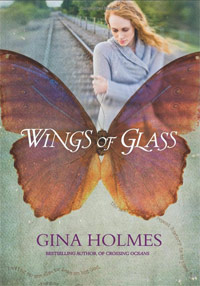 Wings of Glass is a story of a woman discovering she is in an abusive marriage, struggling to make decisions on what is best for herself, her child-to-be, and even the man who seeks to control her. I say she is "discovering," for as the author so beautifully depicts, women in these situations do not always realize God's intent for marriage looks nothing like what they live. In fact, abusers are often very adept at isolating their victims so they have no way of knowing the truth.

In this novel, told in memoire form to the child of the abusive union, the author takes us through the whirlwind romance between Penny and Trent, covered in sweet talk from a charming suitor, into the isolation created by someone practiced at control and abuse. The abuse is allowed to continue, because the victim has no other options, believing she is at fault for the rift in the marriage and not worthy to be loved by any other human (not to mention a Father in Heaven). Penny, at her husband's insistence, blames herself for the state of the home, her husband's affairs, and even his need to constantly "correct" her.

Author Gina Holmes does a masterful job pulling the reader into this character's life without overloading the reader in a world which can be disconcerting to many. Rather than begin the story in a tedious development of abuse, or saturate us in the violence of the present, she starts us at a point where Trent is injured, leaving Penny to fend for their family, offering her both challenges and opportunities. As Penny writes to her young son, Manny, "I hate to wish bad things on you, son, but I hope you get the privilege someday of having no one to lean on but God. It changes a person. It sure changed me." Penny is forced to connect with others, and as God often does, He provides someone who can see through the lies Penny uses to "protect" her husband, and can guide her in ways to protect herself.

We see glimpses of the man Trent has been and watch him fall back into old habits, while hoping he can be redeemed. But for some abusers that is not to be, and as Penny's grandmother told her, "If you kiss a frog, he doesn't turn into a prince; you turn into a frog." It's a warning to those who enter into a relationship with the goal of "fixing" a man (or woman).

Ms. Holmes also does a beautiful job portraying what is known, in the mental health field, as the Cycle of Violence, where an abuser will appear contrite, atoning for his behavior through profuse apologies and gifts. Sometimes she even made me want to believe the man. And though she hit all the important points surrounding an abusive marriage, it was not heavy-handed, feeling as though one were reading a counseling manual or free-clinic brochure. The actions were organic to the story and the characters within the story. The reader lives the abuse with Penny and yet wants to shake her shoulders, along with Callie Mae and Fatima, so she'll see the truth.

The only section that drew me out, leaving me to feel as though it were making a point rather than unfolding a life, was the debate between characters on whether or not marriage after divorce was Biblical. Though the characters on both sides used Biblical arguments, the author seemed to take great pains to endear the reader to one character while distancing them from the other. This is unfortunate, since the discussion could be made on Biblical principles alone, without the need of the author weighting either side.

Gina Holmes does not shy away from the difficult topics. How to assist members of abusive marriages is among the many things the church needs to address. At the end of the novel, she provides a list of resources for those who may relate to the main character as well as the people who love them.