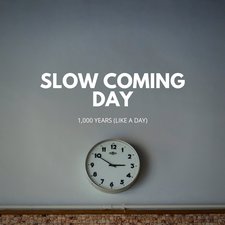 
In 2019, you just never know what blast from the past youll find on a list of upcoming releases. Last year saw new music from the likes of MxPx, The Blamed, and PAX217 (kind of). 2019 promises new music from Bloodshed, Craigs Brother, Rebecca St. James and Slick Shoes (kind of). One of the more unexpected names to release new music this year is a former Tooth & Nail band called Slow Coming Day. Though lead vocalist Orion Walsh has kept busy with a solo career over the years, he's decided to get the band back together, team up with the good folks at Indie Vision Music, and bring us more full band material.

Slow Coming Day was one of a handful of T&N bands that only released one or two albums before riding off into the sunset. Farewell to the Familiar didnt make a huge impact on the scene in 2003, but they did manage to leave fans wanting more. A five-song EP of demos followed their full-length before Walsh went solo and the band stepped back. Now, more than a decade later, 1,000 Years (Like A Day) is here.

One big difference between the bands two full-lengths is the lyrical content. If the album title, which references Psalm 90:4, didnt give it away, then you should know that this album is much, much heavier on the spiritual lyrics. Offhand, I cant recall any explicitly Christian lyricism in Farewell to the Familiar, so its interesting that about half of 1,000 Years (Like A Day) could be described as a worship album. Its an alternative/pop rock album, of course, but a lot of it is worshipful and/or about Jesus in general. There are a few tracks that are about love and relationships, like the opener, First Sight, and the romantic Shoes, Ships, and Sealing Wax. What Happened? even laments about growing and how much life just changes over the years; friends move away, loved ones pass on, and the country grows more evil. But then theres All Things New, which points toward the end of this life when Jesus will wipe away our tears and All things will be made right, all things will be made new, on the day You return. This focus on the second coming of Christ also plays a part in a couple of other songs, like a small portion of Let Go and the entirety of Like A Bolt of Lightning.

Musically, the 2019 incarnation of Slow Coming Day is quite different, as well. Farewell to the Familiar had a lot of alternative rock mixed with a little emo and pop punk, but all of that is significantly toned down this time around. In fact, a good portion of these new songs are electronic-based. Experimentation is important so as not to let your sound become stagnant, but 1,000 Years is so drastically different from their last full-length that it doesnt quite make sense. Several of the songs dont feel like they hit their full potential without rocking guitars and louder drums. What Happened is a great example. In addition, the production value is rather poor, with a lot of the songs sounding muffled or even just a bit empty. Walshs vocals and melodies are also surprisingly off. The title track is particularly rough. If anything, it seems to be due to the melodies and the music itself, as Walshs solo material sound fine. There just doesnt appear to be the same, higher quality applied to these songs.

Its always exciting when a band reunites and releases new music, especially a band from one of the best eras of Tooth & Nail Records's 25-year history. Those who enjoyed Farewell to the Familiar may find themselves enjoying 1,000 Years (Like A Day), or they may be thrown off by how unfamiliar it is. It's a difficult album to recommend, but itll be available wherever you get music, so give it a spin and see what you think.