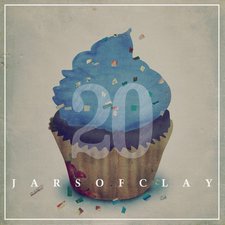 It is no great secret that Jars of Clay has always liked to spoil their fans with extras, b-sides, and special renditions, and those fans have eaten up every last thing that they have been offered. Now, 20 years after a Greenville College school project called Frail made heads turn in the Christian music industry (as well as 20 years after the band's only lineup change ever, as Matt Bronleewe elected to finish school instead of sign on to a record label), Jars is celebrating both their outstanding success and the commitment of their fans with this special project (among other treats throughout the year). Special acoustic reimaginings of 18 fan-selected songs (two from each studio album minus The Shelter) and two new songs make up the project's tracklist, and the final result is enough to make any hardcore Jars fan's heart melt.

Now for the most part, Jars did not go the route of 2011's wonderful (but brief) release Reinvent, Remember, Replay, in which each track was truly reimagined and overhauled instrumentally (including a tasty - but jarring - synthesizer solo on one track), rather mostly going with a straight-up acoustic approach. But this is not to say that each track does not have a full and complete sound achieved with layered vocals, percussion, and orchestral elements. A few songs throw in some unexpected electronic instrumentation (sometimes subtle like "Dead Man" or "Collide," but also very obvious like "Trouble Is" or "Ghost In The Moon"). The thing this approach does not really do is make any one song more "interesting," per say, than any other track (although the somewhat odd treatment of "God Will Lift Up Our Head" raised my eyebrows a bit, though I do ultimately like it). That said, "Trouble Is" would be one that I would list as a real highlight, being simultaneously similar to and radically different from the original (it's hard to explain, but a few listens will give you a sense of what I mean).

The collection's overall selection of songs is also worth highlighting. Since the fans ultimately were the ones to decide on the included tracks, they (not unexpectedly) chose the ones that meant the most to them personally, forgoing many of the band's most commercially successful songs, explaining the absence of songs like "Flood," "Crazy Times," "Unforgetful You," or "Two Hands." As such, the lineup is heavy on the band's emotional and tender side, such as "Worlds Apart" "Jealous Kind," "Boys," or "Silence." In that sense, the tracklist itself is truly an examination of the psyche of Jars of Clay's fanbase. But it is also interesting to see Jars' treatment of each song (or rather, each type of song), as they seemed to more freely experiment with songs that have less of an emotional pull ("God Will Life Up Your Head," "Collide," or "Dead Man" come to mind), while laying the strings on thick for the others (especially the album's gorgeous finale "Love Song For A Savior," a song that I could put on repeat for hours on end when I'm in the right mood). As for the two new tracks, "Ghost In The Moon" is a very interesting exploration of sound (and while I'm definitely glad they tried to capture a haunting, southern-type sound, it probably wasn't executed to its fullest potential), and "If You Love Her" falls right in line with the sounds from Inland.

Sometimes it takes listening to a collection like this to truly realize how much a band's work has meant to you, as it did for me; even the songs that I would not have necessarily expected to be here work tremendously, and remind me of how much I underappreciate the originals ("Silence" immediately comes to mind). I feel that any Jars fan will feel the same, which is why it isn't really worth mentioning whether or not these renditions are "better" or "worse" than the originals, or even which songs in this collection are "better" or "worse" than others (which is actually something I thought I was going to talk about in the early stages of writing this review, but ultimately decided against). Casual fans or non-fans probably won't be converted to die-hards with 20, but frankly, that is not an uncommon flaw with acoustic albums. That said, I can literally find no reason for a Jars fan not to get this record. class="coversize" align=right>

Early Thoughts...
Think about this for a moment; Jars of Clay has had a grand total of one lineup change in their history, which occurred before they were ever signed to a label. If any band can build up their 20th anniversary into an epic event, it's these guys. While their album sales today pale compared to their double-platinum certified debut, their fanbase remains as strong as ever, and this year, Jars decided to reward the fans for their dedication to them these past 20 years. Alongside hosting online StageIt concerts (and then offering free downloads of those concert's highlights), they started a PledgeMusic campaign for a 20th anniversary acoustic double-album collection, with the songs voted on by their fans (two songs from each of their original studio albums minus their collaborative effort, The Shelter), plus two new songs. The result is enough to make many a longtime fan's heart melt. While not quite as "reinvented" as their 2011 5-song acoustic EP (although a few songs contain some surprises not often heard on "acoustic" collections), most of these songs were delivered with a wonderful stripped-back approach which are at the same time fully true to their original tunes and yet also creatively reinterpreted. Some renditions are definitely better than others for various reasons, but I dare not say anything else until I can get in a few more listens. This I will say, though; I hardly contain my excitement for this collection's rendition of a song that has meant so much to me personally all my life, the collection's closer "Love Song For A Savior." Jars fans, you will not want to miss this momentous collection. --->

Always ahead of the curve, Jars of Clay keeps finding ways to stay in the conversation. But that's exactly how they're still going strong after twenty entire years of music, an impressive feat all by itself. To celebrate, Jars is releasing 20, a special project consisting of reimaginings of previous cuts. Instead of merely picking their singles for this set of re-recordings to get a greatest-hits compilation, Jars polled their ardent fans to pick the tracks here, and the result is an inspired project tailor-made for their fanbase. While trademark songs "Love Song for a Savior" and "Worlds Apart" made the obligatory cut, the selections here are inspired and make the double-album a unique installment. Tracks like "Trouble Is," "Silence," "Tea and Sympathy," and "Collide" are especially welcome inclusions here, and even some of the band's most recent tracks benefit from the treatment ("Love In Hard Times," "Inland," "Safe to Land," "Boys"). Additionally, the two new songs here (the soulful "Ghost in the Moon" and the Inland-inspired "If You Love Her") live up to Jars pedigree without issue. In the end, it's a comprehensive stroll down the Jars of Clay catalog, and perhaps apart from this project's jarring version of "God Will Lift Up Your Head," the tracks sound good together under these new arrangements. The most dedicated of Jars fans have long preordered this collection, but for those who missed the memo, 20 is a generous and worthwhile project that increases the longevity of already timeless songs from the respected veterans. - Review date: 8/17/14, Roger Gelwicks

For 20, Jars of Clay celebrates two decades of music with a retrospective fan favorites project assembled with completely re-recorded selections from their band's musical history. Fans helped pick 18 of the 20 songs, with two new ones tacked on. The end result is an intriguing mix of Jars of Clay fan staples that lean toward the introspective and spiritually dense side, thematically speaking. Emotional laments like "Something Beautiful," "Oh My God," "Silence," "I Need Thee Every Hour" and "Worlds Apart" are complete gems that beautifully translate in updated, acoustic form. Then there's the romantic relationship musings like "Tea and Sympathy," "Safe To Land," "Love In Hard Times" and "Inland" that represent the heartaches we all face. Add in more upbeat offerings like "Fade To Grey," "God Will Lift Up Your Head," "Dead Man," "Trouble Is," and "Love Song for a Savior," and you've got a pretty well-rounded look at not only the hills and valleys of the walk of a believer, but a musical journey these four men have travelled from late teens to adulthood. These may not be the band's hits, but they're the songs that have proven to be the most impactful in the lives of their fans. The fact that the songs are re-recorded in acoustic form allows a cohesiveness to this retrospective that is fresh and vital. The jury's still out, however, on whether the new, moody cut "Ghost In The Moon" fits at all here (it's "new" to a Jars album, but it appeared on a Nashville Indie Spotlight compilation earlier this year), but overall, 20 is a beautiful collection with a meaningful look into an incredible 20 years of music-making. - Preview Review: 8/2/14; Review date: 8/17/14, John DiBiase of Jesusfreakhideout.com