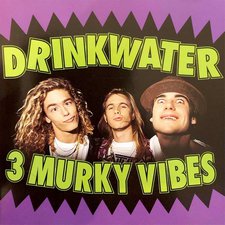 
Many years ago, long before both his successful solo career and his influential work with the Newsboys, the ageless Christian mainstay artist Phil Joel was part of a small New Zealand trio known as Drinkwater. Their first album, 3 Murky Vibes, originally released in 1993 - nearly three decades back. While murmurs regarding this album's existence have long haunted the Internet, the album's actual availability has been relegated to incomplete fragments shared across dark corners of seldom-visited websites.

Some years back, I decided to begin searching for this lost relic. I was unsure as to whether the album would be a hidden treasure trove of Joel's unbridled talent or, more worrisome, a less-than-pleasant faux-pas which indeed should have been lost to time. Unfortunately, my searches yielded little more than a few lyric sheets and some lo-fi .mp2 (yes, you read that correctly) files containing bits of "Bad Jelly," "Do You Know Who You Are," and "Be No. 1." These bits only served to add to the intrigue and raise further questions about what was shaping up to be one of the quirkiest Christian albums in recent memory.

Naturally, it came as quite a shock to see that Joel and company quietly released a remastered version of the album on Amazon and Spotify this February. For the first time in decades, the whole of 3 Murky Vibes is available to the public, and let me be the first to say that listeners are in for a real treat. A whimsical, odd, and at times jarring treat, but a treat nonetheless.

The album opens with "Bad Jelly," which does a great job of setting the off-beat tone for the rest of the bass-driven album. The lyrics are... special, to say the least: "Early Sunday morning to the dairy I went walking / to get some milk to put upon my eggs / but when I got down to the corner a little man said / 'I think I better warn ya; the dairy is shut and all the full-cream milk has gone!' / Oh no, I'll never have milk on my eggs again!" Joel then goes on to repeat the line "Bad jelly has taken Lucy away."

"It Can't Go On" is a fun song (and is a bit more straightforward than its predecessor), boasting some fun summer vibes while follow-up "Do You Know Who You Are" offers raw energy. "Green Eggs & Ham" is a bass-centric instrumental, while "Be No. 1" is a fantastic album highlight. Its catchy melody pairs well with its devout and scripturally-based lyrics: "If any man would come after Me / let him take up his cross and follow Me daily / if any man would wanna save his life he will lose it / if any man would lose his life for Me he will save it / I want You to be a part of everything I do / I want You to be number one."

The slow funk/R&B jams of "Hey Lady" provide another shining moment, showcasing the band's skill and versatility, as well as Joel's experimentation with growlings/screams which continue on the next track, "Chill Out." The latter provides some fun lyrics: "Leave the fridge door open, you need to defrost / loosen your grip baby, enjoy 'cause you ain't lost / do I have to spell it out? / let me hear you shout / 'chill out, brussel sprout!'" "Don't Look Now" is a well-written '90s throwback and again demonstrates Joel's sincere faith ("Don't look now 'cause tomorrow is on the way / don't let it make you wanna give up trust / 'cause I know the best is on the way / and you know I'm talking about eternity").

Earlier, I used the word "unbridled" to describe what I hoped this album would encompass. I can think of no better description for the track "Sometimes," a love song with an acoustic atmosphere at the beginning, followed by a heavy breakdown, some desperate screams, and an emotional sigh to cap it all off. The following penultimate track, "Need a New Start," bears a great deal of weightiness and delivers contemplative and darker lyrics ("There were cowboys in the house / digging their own graves / there were babies in the bathroom / playing with razor blades / Grace is there for the taking / but my arm feels too short"). While this hopeful and melancholic song is both complex and refreshing, the final offering, "Gibbidy Gib," sounds like a track pulled straight out of Tony Hawk's Pro Skater. It is a mostly nonsensical piece which sees a hodgepodge of earlier lyrics warped and distorted in a goofy punk/rap-rock format, making for an album closer to remember.

Listeners who are familiar with Phil Joel's larger discography will not be entirely surprised by the immense degree of fun-loving quirk, but 3 Murky Vibes does an exceptional job of showcasing *exactly* what Joel brought to the Newsboys and how perfectly his addition paired with Peter Furler and Steve Taylor. Ultimately, it is difficult to put this album into words. It is eccentric in the best of ways with plenty of goofiness, worship, and contemplation to fill an entire discography. However, music is nothing if not entertainment, and this album boasts an exceedingly rare degree of skillful creativity: I can do little more than highly recommend it to readers.

Here's hoping that Drinkwater's 2001 compilation album, Today: Songs From Then and Now makes a similar appearance soon. Until then, I highly recommend checking out "Bad Jelly," "Be No. 1," "Sometimes," and "Need a New Start" to get a feel for what this album is all about.