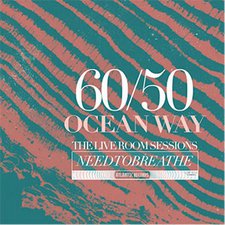 The South Carolina rock band NEEDTOBREATHE released an EP with live-studio remakes of fan favorites this August. The songs are live takes in a studio, with no "magic tricks" to mask mistakes on the recording. To make it more interesting, they remade the songs, incorporating parts of the concert versions to make the songs feel fresh.

"State I'm In" is an underrated southern rock song that shows off the band's skills. Bo Rhinehart plays the electric guitar with a confidence and style that we need to hear more often in music. (To check out NEEDTOBREATHE's guitar skills, look up "NEEDTOBREATHE live Folsom Prison Blues" on YouTube). What really makes "State I'm In" so catchy is how the drums, guitars, keys, and vocals make a beat that stays in your head and flows seamlessly.

"The Heart" is one of their most promoted and successful songs off the new album, Rivers In The Wasteland, debuting at number three on the Billboard 200 and being played on David Letterman's show. "The Heart" features the acoustic guitar, keyboard, and a feel-good beat. This is a good song in its own right, but other songs stand out more here. The sound switches to a campfire feel with "Wasteland," but unfortunately the lack of keyboards and electric guitars hurts until the last two minutes, when they recover spectacularly with the background vocals and Bear's leads.

"Difference Maker" features a similar campfire sound but with much better execution. The seriousness of the lyrics, background instruments, and unique vocals make this fan favorite stand out. "The Outsiders" is one of the most different remakes, sounding more authentic, live, and open than the original. Bear brings a fighting attitude with his lyrics, improving the sound dramatically.

"Devil's been Talkin'" is a more upbeat version than the original version produced in the band's dark times. Randy Harris' drumming stands out compared to the rest of the EP performance, which controls the mood and intensity of the song. The only negative about this remake is that it feels way too upbeat compared to the original version, which makes it feel contradictory. The closer, "Something Beautiful," is an optimistic and catchy remake that sounds like something a man would sing to a special girl. The romantic themes are emphasized by the band's vocal style and instrument play, which fit in with the lyrics perfectly.

60-50 Ocean Way is a great buy for loyal fans, as the band puts new touches on old favorites. All of the remakes but "Wasteland" are re-energized without losing the touches of what makes NEEDTOBREATHE unique and nonconformist. New fans who like acoustic music and listeners who want a band without fake tricks should also give this album a shot.