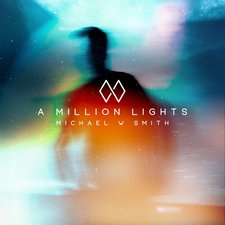 
Michael W. Smith needs no introduction to most, as he has now been in the CCM industry for over thirty years and has released twenty-five albums over that span. However, here is something you probably never dreamed you would hear in the same sentence; Michael W. Smith releases a new album titled A Million Lights, full of piano pop and electronic dance music stylings. Yes, Michael W. Smith and EDM. If you are anything like this reviewer who is a long-time fan of his work, this may be a shock to your system. You may hate it at first, but maybe, just maybe it grows on you. Having said all of that, not everything works perfectly, and ultimately this may not be your thing, but there are a few highlights worth mentioning if you are willing to take on this unexpected musical turn.

Title track and lead song for the album "A Million Lights" kicks things off with the synthesizers and familiar Smitty melody, but then kicks into a gear that takes it places that mainstream artists like Coldplay and Chainsmokers haven been with recent releases. The song, like many others on the album, has a strange way of slowly growing on you, and gets better with repeat listens. It is upbeat, hopeful, and fun. Another that falls in a similar category is second track "Conversations," which, apart from distinct Smith vocals, could fit on a Justin Bieber, Kygo, or DJ Snake album musically. "Crashing Waves" takes the most familiar musical approach to fans of his worship releases, with its gang vocal chorus, organ drenched bridge, and drums high in the mix. The best slow moment on the album comes from "Hey Love," a tender piano ballad featuring beautiful female harmonies. Their voices weave together pleasantly as they sing, "Hey love it's me/hey love it's me/I want you like I wanted you back then/I want you more today than I did then/In other words I want you always."

The two main critiques are that a few of the songs come off feeling either too derivative of their influences, a la songs "Your Love" and "Something In My Heart," and there is arguably too much schmaltz on songs like "Footsteps" and "You Make Me Feel This Way." Otherwise, a catchy tune, the lower register he reaches for in the verses of "You Make Me Feel This Way" comes off as trying a little too hard. Overall, though, this is a solid, albeit heavily influenced, take on modern pop from a Christian music icon.

Therefore, if you can overcome the weirdness of Michael W. Smith releasing an EDM infused album, or you are a fan of that genre of music itself, this just may be the release for you. Now that I am over the surprise turn of musical direction, it is really beginning to grow on me, and I could see revisiting A Million Lights often this year. For fans of Michael W. Smith the worship artist, approach this one with an open mind, and if it doesn't do anything for you, hold on for his worship focused release, Surrounded, coming next week.

No matter how many hymns records, Christmas projects, instrumentals, live worship albums, or contemporary forays Michael W. Smith creates, his vocals will always have a place over the sound of the times, whatever it is. This being 2018, that sound happens to be beat-filled EDM-inspired pop, and A Million Lights presents Smitty once again adapting today's music into his repertoire like he has done in the past with albums the The Big Picture, Change Your World, or Live The Life.

Opening with the title track, Smitty jumps out of the gate with a very strong start. I don't think "A Million Lights" would be completely at home alongside modern pop artists like Tauren Wells or Britt Nicole, but it is a prefect collision of fuzzy, beat-filled pop with one of the most classic voices in Christian music. "Conversation" continues the trend, while getting to the heart of the album's lyrical emphasis on unity and reconciliation. Nearly every song has something to say along those lines, making this something of a concept album. "Footsteps," "Crashing Waves," and the much more contemporary "Hey Love" all also stand out as highlights, and it's fun to hear the occasional musical or lyrical references to Smity's past works.

But the thing that betrays this album the most is that, over the course of the thirteen tracks, Smitty distances himself more and more from the EDM sound that he was trying to adapt and into the much more familiar and comfortable realm of radio-friendly contemporary sounds, like previous albums Sovereign and Healing Rain. In fact, the final four tracks don't really have any EDM influence at all, and so the effect of his "return to his pop roots" feels somewhat shortchanged. I think that if he would have stuck with his EDM approach to the end, we would have a stronger, more cohesive, more interesting record. The other thing that holds the album back is that, unlike other pop artists today, or even Smitty's past pop projects, there aren't any super catchy or memorable hooks or tracks that he really let go and seem to have fun. In short, it feels pretty laid back at times, like he was cautious not to go all-out. But overall, it's a pleasant experience and a solid album with a worthwhile message. - Review date: 2/28/18, written by Mark Rice

Michael W. Smith is one of the defining faces of modern Christian music and with that title comes a talent that has captivated listeners time and again. With his beautiful 2010 effort, Wonder, his capabilities as a songwriter were never clearer. On the contrary, A Million Lights borrows more from the popular instead of capitalizing on his identity as a songwriter and as a result, it's a disheartening listen. The record draws heavy influence from acts like Coldplay, The Chainsmokers ("Something In My Heart") and even Fifth Harmony ("Footsteps") with its heavy use of synths, EDM drops and inspirational aesthetic. As an electronic album, it's serviceable at best. The piano-led ballad "Hey Love," as well as the string-laden "Forgive," are the record's strongest and most familiar offerings. I wish I could give similar praise to other tracks here, but A Million Lights is an unremarkable and unfortunate excursion overall. - 2/20/18 Lucas Munachen