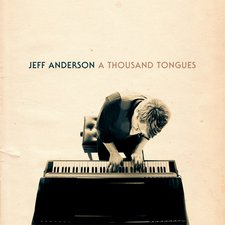 After a modest introduction into Christian music with his debut album, Seamless, through Gotee Records in 2005, Jeff Anderson laid low for a few years but is getting ready to release his sophomore full-length record this year. In preparation for it, Anderson has given listeners a four-song taste of what's to come. Titled A Thousand Tongues, the EP may not quite be the grand reintroduction to listeners that it's intended to be.

The EP opens with the Coldplay-ish "Glory to God." Nothing against Coldplay, it's just been done many times before. The music is excellent but once the vocals come in, the song loses its punch as the vocals aren't very strong and the harmonies feel weak. However, "There is a Light (His Name is Jesus)" is much more effective. Anderson's low and soft vocals sound terrific paired with the ambient music. Unfortunately, near the halfway poin, his voice seems to struggle as he tries to belt it out. Oftentimes, raw vocals get pushed to the side when they should be embraced; while they can be very appealing, sometimes a singer should stick to what they do best and stay put.

The title track, "A Thousand Tongues," is indeed the worship song written so long ago by Charles Wesley and covered more recently by David Crowder*Band. While the music is very calming and great to listen to, it suffers from the same problem that the previous songs did: weak vocals. In addition, the melody is simply not easy to follow. Instead of paying homage to the original, Anderson deconstructs the song and rebuilds it as his own. Some people might think this is a great idea, but I would disagree. It is good to interpret differently but to deter so far from the original seems to remove the heart of the song. On a happy note, in the final track, "Your Love Never Fails Me," Anderson finds his sweet spot and sticks with it for most of the track. The passion is so strong as Anderson sings, "Though the world around me crumbles and the voices in my head say, 'I can't do it,' I will go with you." The simplicity of the song is beautiful. His falsetto shines here and the music complements his voice perfectly.

Jeff Anderson's release might not be a complete hit, but it is definitely not a complete miss either. A Thousand Tongues features some great music with a flair for melodic piano-rock. If you are into that style and extremely raw vocals with Christ-centered lyrics, you'll find what you're looking for. Sadly, it won't be anything you haven't already heard.