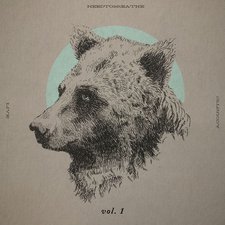 
NEEDTOBREATHE hardly requires introduction to most, as they have been an immensely popular and prolific band over the course of their twelve-year major label career. Newest album Acoustic Live Vol. 1 marks their seventh full-length release, and as the title would indicate, listeners are gifted the stripped down, live concert treatment. The band has delivered on an oft fan requested acoustic album, and it does not disappoint.

Depending on your preference for studio versus live recordings, this album may or may not be your cup of tea. This reviewer typically falls into the "not a fan of live albums" camp for several reasons. However, let it be known that this is the rare exception to that preference. All the common problems of live releases--like crowd noise, singing, clapping, bad sound mix, or in between song banter--are easily outmatched with slabs of NEEDTOBREATHE charm and excellence.

A surprising song to kick things off with, "Let's Stay Home Tonight" does well to set the tone for the album. The vocals sound spectacular, and the tempo is slightly faster with a country shuffle replacing the more gentle piano approach of the original. Lead singer Bear Rinehart's voice shines on "Drive All Night," with his throaty rasp paired with banjo and hand claps. Sweet harmonies and a tasty Hammond B3 Organ carry "No Excuses" to a satisfying transition into cover song "House of the Rising Sun." Following this rousing song with "State I'm In" was a great choice, as they launch into a boot stomping, rip roaring, crowd pleaser. Piano slows things down at the mid-point of the song, giving way to Beach Boys-esque harmonies that absolutely nail it. Bear takes a few moments to playfully describe their musical influences before launching into mega hit "Washed By The Water." If possible, it's even more soulful than the original, with just a piano and Bear wailing his heart out. Their cover of "Stand By Me" could make you wonder if it wasn't one of their songs to begin with, as it's performed with a conviction and passion usually reserved for the writer. It's a show-stopping number that has the audience fully engaged and singing along. Another highlight worth mentioning is the guest feature of Drew & Ellie Holcomb on "Stones Over Rushing Water." Harmonica and gang vocals make this a hair-raising, spine-tingling moment. Lesser known song, yet no b-side, "Cages" is another one you won't want to miss. "Brother" is sung sans sound system and ends the album with an intimate, well-received finish.

So, with so many things going right for the album, is there anything that misses the mark? The short answer is not really. Perhaps a small critique could be levied at the choice of songs to get the acoustic treatment, as many of these were already slow, or mid-tempo songs. However, this may be something remedied with subsequent releases. Again, this is really a nitpick complaint, as the whole album is fantastic from top to bottom.

NEEDTOBREATHE has done it again, and fans can only hope that this terrific Acoustic Live Vol. 1 will be followed with a Vol. 2 in the near future. It's a definite must for fans of the band, fans of live albums, and those in need of an uplifting listening experience. If you have never made a NEEDTOBREATHE live show, you should definitely make it a priority, but this album is a good appetizer, and the next best thing.

NEEDTOBREATHE's sound has taken a poppier turn over the last few years, straying away from their southern rock days without completely leaving them behind. However, their second live full-length album steps back in time a bit. Acoustic Live, Vol. 1 has a terrific sound that gives the listener a stripped-down taste of some classics and fan favorites, and some of them might even sound better than the originals. The band covers all of their full-length albums, save for their debut, Daylight, with stunning takes on songs like Drive All Night, Washed By The Water, and Brother. Some added treats include a guest appearance from Drew and Ellie Holcomb on Stones Under Rushing Water and a cover of the classic Ben E. King hit, Stand By Me. NEEDTOBREATHE's first shot at an acoustic album has worked out quite well, and it has me ready for their next studio album. - Review date: 11/17/18, Scott Fryberger of Jesusfreakhideout.com