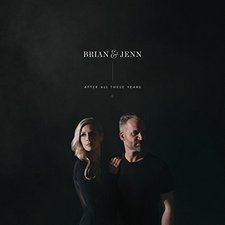 Brian & Jenn Johnson
After All These Years


Brian and Jenn Johnson are mainstays in the worship scene, having been worship pastors at Bethel Church for the last fifteen years. Over the last ten years, they have been at the forefront of the scene through Bethel music penning anthems such as "One Thing Remains (Your Love Never Fails)," "Forever" and "Love Came Down." After All These Years marks the first album in ten years for the duo, who co-wrote every song on the album, and tells the story of where they've come and where they are going. The album is stylistically a marked departure from their previous efforts as every track features a symphony orchestra mixed with their thoughtful lyrics.

The album opens up with "Mention of Your Name" and right off you can tell you're in for a special journey as Jenn croons, "You're here with the grace of the Savior and the heart of a Father, You're all we need," and the sounds of cheerful violins float in and out. It seems, in its almost prayer-like cadence, something off of an Audrey Assad album. Brian takes over for "Only Jesus," the plaintive cry of the chorus "Let my heart want for nothing but You, just You" becomes the focal point of the remainder of the album. Jenn is back for the third cut on the album, "Gravity," an opus that explores the boundless grace and love of our Father. It is also the first track that features instrumentation aside from the classical arrangements.

Brian fronts the fourth cut on the album, "I Won't Forget," a confessional track that every Christian can identify with: "You came in the night and tore down the wall's that held my broken heart, when all I could see lay ruined and scarred Your light shattered the dark." Brian continues lead duties with "Mercy and Majesty," the standout track of the album, as it ushers in such a worshipful atmosphere and is destined to be a great congregational song. On "Here I Bow," Jenn returns with another track that sounds primed to be a staple in Sunday mornings as lyrically the song is most reminiscent of their better known worship songs as the refrain, "So here I bow to lift You high, Jesus be glorified" is repeated and builds upon itself throughout the track. "Greater Than All Other Names" and "After All of These Years" are the trademark of the duo as the lyrics continue to foster a worshipful atmosphere backed by the happy sounds of the orchestra.

"You're Gonna Be OK" is the second to last track on the album and the one lone cut that deviates from the worshipful discourse of the remainder of the project. The lyrics focus on encouraging those who are struggling through a bad season in their lives: "I know it's all you've got to just be strong, and it's a fight to just keep it together, I know you think you are to far gone but hope is never lost." The emotive lyrical delivery that Jenn brings to the track is one of someone who's been there and has seen the other side of the mountain and knows what victories lie there, serving as a testimony for those who follow. The album closes with "For the One" and it's an important message of love, especially in the present social climate, "A love that erased all the lines and sees the truth."

The Johnsons do not disappoint in their latest offering as the years of leading and writing worship music lend a polish and depth that only years and experience can bring. The neoclassical arrangements give the music an artsy enough experience to impress the hipster culture as well as the casual music connoisseur. It is a worshipful experience that is well worth the journey and has me excited about the worship music scene.