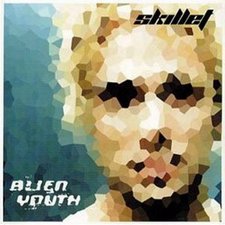 
Skillet is a band that has certainly done its share of musical evolution over the past five years. Since their self-titled debut release on Forefront/Ardent Records in 1996, the band has been releasing hard-hitting tunes with a strong Christ-centered message and captivating audiences with their energetic and worship-filled live performances. With their 2001 release, Alien Youth, their first release on just Ardent Records, Skillet delivers what is probably their best album to date.

Alien Youth, the band's fourth studio recording, opens with its explosive title track which, from the first four lines, makes it very clear to the listener where this band stands, "Worldwide Jesus domination/ Love conquers all/ Rise like a chosen generation/ There's no stopping at all." Skillet went into the studio with the goals of making this their most aggressive and passionate record yet. And with the boldness of the first couple tracks, including the slamming "Vapor" and rocking "Earth Invasion," it's apparent that the band has accomplished their goal.

As well as being more aggressive, the album is also arguably more worshipful than their previous studio recordings. Songs like the mellower "You Are My Hope" and the amazing and spine-tingling "The Thirst is Taking Over" set Skillet as being one of the best modern worship acts around. While rocking their hardest, the band also mellows out softer than they ever have with the almost equally as moving "Will You Be There" and "Come My Way." But the worship does not exist solely among the ballads. "Kill Me Heal Me" is a heavy, crunchy guitar-laden industrial rocker, crying out to God, making brokenness and God's healing touch the only means for survival in this world.

"Rippin' Me Off" was born out of an interesting experience of lead singer John Cooper's. In the midst of all the hype surrounding controversial secular performer Marilyn Manson, Cooper decided to attend one of Manson's shows to see what it was all about. According to the band's bio, Cooper found it "spirit-crushing." "Manson had all these fanatical fans agreeing with him, cursing our God," John laments in the bio. "I wanted to tell these kids the Truth. That our God is a loving God and that they are being ripped off by these lies." The song clearly portrays the frustration and pain John felt when witnessing the lies being fed to today's hurting youth. The chorus shouts in response, "You say that God is dead but you're rippin' me off/ You can't infect my mind with your vanity/ You're rippin' me off!"

Another highlight of Alien Youth includes territory being explored that Skillet had not previously. This is the inclusion of John Cooper's wife's background and lead vocals. When Korey's soothing voice enters the gripping "The Thirst is Taking Over" rock ballad, her passion adds an infectious element to the song. When the Coopers duet on "Will You Be There," it adds a whole new depth to the song which would otherwise not be present. Korey really adds to the beauty of these songs.

After numerous listens, it has become clear why Skillet is one of the leading bands in Christian rock today. Their electronic/industrial hard rock is an excellent addition to the growing Christian music scene. And I'm happy to say that Alien Youth is not only Skillet's best album to date, but has secured itself a spot as one of the best albums of 2001.