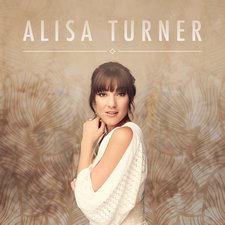 
It's been over seven years since Alisa Turner has released any music, but this past year, she decided to take a leap of faith and crowdfund a worship EP through GoFundMe. After raising a little more than half of her projected goal, she was later signed to worship label Integrity Music, with news that her long-awaited EP will finally be released. This self-titled project proves to be worth the wait, and although Turner describes herself as "pretty unpolished and inexperienced than most worship leaders" on her GoFundMe page, this EP shows otherwise.

"Many are the weapons of my enemies," Turner croons as she opens the EP with "Lift My Eyes." It's an interesting way to begin a worship project, as we've often heard worship releases start with a praise song. Here, Turner evokes the Psalms of David, particularly Psalm 121, as she sings, "I will lift my eyes to where my help comes from." It's a song of triumph loaded with scriptural references, and it's a refreshing change from the typical worship fare.

If the EP were a crown, "My Prayer For You" would be the crown jewel. It's a lush, stirring piano-and-strings affair, and we get to hear some of the jazzy undertones in Turner's vocal delivery. The message of the song will resonate with the weary believer who has prayed a long time without seeing any answer to their request, and Turner encourages them with the chorus, "May God give you eyes to see He's still greater / Courage to rise and believe He's able / May God be your peace in the fire you're walking through / This is my prayer now--this is my prayer for you."

"As It Is In Heaven," while a lovely meditation, brings a slight lull to the EP, partly because it follows behind the stellar ballad "My Prayer for You." Turner opts to keep the tone reflective instead of picking up the pace, but thankfully the track does build up and ends with a choir backing Turner, adding more power to the sound. "Psalm 13" is the quiet closer, and the stripped down piano gives Turner's voice more breathing room as she ponders the Lord's goodness, declaring that, despite the trials she faces, she will choose to trust in Him.

My main lament about this EP is that I wish there was more unique music to complement Ms. Turner's versatile voice. While listening, artists like Steffany Gretzinger and Amanda Cook popped up in my head, and Turner is certainly on par with them in the vocal department, but her EP doesn't sound much different from what the others have already released. Turner does have an edge lyrically--she has infused scripture-based lyrics throughout the songs on the EP, and it does make a difference for the listener. Overall, this EP is a solid jumping off point for Alisa Turner, and I believe there are good things ahead for her down the road.