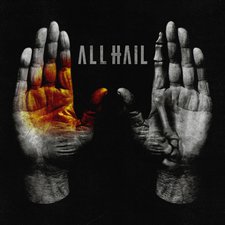 
"The Almighty Norma Jean." It's a title the band has deservedly earned from their fans over a long and arduous career and through rigorous experimentation. What began as a raw, chaotic hardcore act with garage band production slowly but steadily morphed into the metalcore giant it is known as today. Since the release of 2013's Wrongdoers, Norma Jean has been revelling in the sound they spent record upon record perfecting. A couple of examples of what you'll hear from a Norma Jean project today are tightly composed yet ambitiously creative riffs, a controlled yet seemingly untamable desire for chaos, and vocal hooks that are borderline genius. This leads us to All Hail, the collective's eighth full-length project. In some ways, All Hail could be described as the band's eponymous album, a celebration of all that they have accomplished to this point. So, is it worth the time of fans who have seen them evolve over the years? Perhaps even more importantly, is it worth the time of heavy music fans who want something more from metalcore? I believe the answer is an emphatic yes.

Norma Jean is back and they absolutely know it, as "Orphan Twin" opens the record with a foreboding wall of feedback before Cory Brandan's monstrous vocals take center stage. "[Mind Over Mind]," the album's lead single, keeps the momentum going, with a thunderous riff and a tastefully arranged breakdown. The way the band takes arguably formulaic songs and creates within them a rollercoaster of sounds brimming with unexpected twists and turns never ceases to amaze me. "Safety Last" (quite possibly the coolest song title the band has ever come up with) is nothing short of ferocious and showcases one of the best vocal performances we've heard from Brandan yet. He brings a chilling mixture of anger, desperation, and unbridled passion into each word he screams. Will Putney's production paints the record with a gritty and raw texture that only amplifies the instrumental and vocal destruction.

The middle half of the record further explores the dynamics that make up the core of their sound. "Landslide Defeater," yet another adrenaline-inducing, face-pummeling highlight, winds down for a restrained bridge before diving right back into the chaos. "Full Circle in Under a Minute" takes a more groove-oriented approach as it starts to dial back on the aggression for a heavily melodic chorus. The most surprising aspect of All Hail is the lengths it takes to explore more atmospheric textures. "/with_errors," for example, sounds like something that could have come straight off of Underoath's Define The Great Line. It's melodic metalcore with an acute awareness of space and ambience. "Translational" is especially notable in this regard, as is the trilogy of album closers, "If [Loss] Then [Leader]," "Careen" and "Anna," which could very well be new career highlights for the band. It's difficult to predict how fans will take this new approach to their songwriting, but it's something I've been wanting to hear from them since they gave us "Sword In Mouth, Fire Eyes" six years ago, and the result is terrific.

Polar Similar took a lot of creative risks for the band, including, but not limited to, longer, adventurous interludes and progressive song structures. It's become the newest benchmark for metalcore. Whether All Hail will conjure up a similar reputation is up in the air. It doesn't quite attempt to break new ground and, in some ways, that is disappointing. However, this is Norma Jean being Norma Jean and it's great to see them resting on their laurels a little. The time for exploration and evolution is over... for now. In the meantime, we have this chance to celebrate what this amazing band has done for metalcore since Bless the Martyr, Kiss the Child came out nearly two decades ago. All hail the almighty Norma Jean.

As one of the most uniquely shapeshifting groups in metalcore, Norma Jean has built a tested reputation off of their ability to do something different every time around. With All Hail, however, Cory and the guys seem more intent on tightening up their sound rather than branching out yet again. There are the usual deliciously meaty riffs and catchy yelling choruses that we've gotten used to since Wrongdoers, but the decision to focus their stylistic tendencies makes for less interesting asides and more repetitive tracks. The album's accomplishment is also its deficiency, as it borrows heavily from the structural blueprint of Polar Similar - feeling somehow smarter and tamer as a result. Additionally, many moments in the tracklist feel not as well-mixed; guitars go from abrasive to noticeably squashed, and Cory often seems to be farther back than usual. The phrase "more of the same" is usually considered negative when it comes to creative endeavors, but All Hail is mostly able to manipulate the phrase into a net gain. The group has a clear vision as to what they should and can do, and because of that, this album is sure to largely please the fans it was made for and dedicated to. - Review date: 10/21/19, Mason Haynie of Jesusfreakhideout.com

Norma Jean is a powerhouse, relentlessly giving their loyal fans some of the best heavy music over the past nearly two decades. All Hail is their second album after rejoining the Solid State family, and the album helps NJ maintain their status as one of the labels finest signings of all time. Highlights include Safety Last, Landslide Defeater, Full Circle In Under A Minute, and If (Loss) Then (Leader). Dont pass this up; All Hail is top tier Norma Jean. - 10/24/19 Scott Fryberger