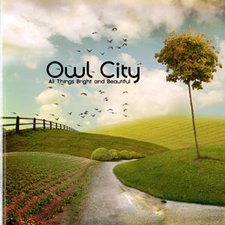 MySpace kids first fell in love with his music with songs like "Hot Air Balloon" and "Strawberry Avalanche," which got many, many plays on the social network. The rest of the world soon caught up when Universal Records picked him up and blew up the airwaves with "Fireflies." His name is Adam Young, and he's the brains behind the synth pop enigma known as Owl City. His Universal debut Ocean Eyes brought an amazingly-fast rise to mega popularity. Just under two years later, he's already set to release his sophomore record, All Things Bright and Beautiful. Without a doubt, Ocean Eyes made itself known as a hard record to top, but he just may have done it.

If I may be honest, I didn't have extremely high hopes for his eventual follow-up. When his new single, "Alligator Sky," first got leaked, I listened to it and was a little disappointed that it sounded a lot like "Fireflies." Not that "Fireflies" is a bad song, but it got so much airplay that I felt like Young was just banking on that sound to keep his popularity up. I did like "Alligator Sky," but I didn't love it. Come to find out, that wasn't the actual album version. When I first heard the album version, I was mesmerized. Guest vocalist Shawn Chrystopher took control of the song's verses, and turned it into somewhat of a hip hop song. Yes, the verses are rapped, and Young only sings in the hook and bridge. The song is a huge departure from former Owl City material, while still maintaining that essence with the music and the hook. I'm happy to say that Young has successfully matured his sound while keeping true to it as well.

Young has talked about being largely influenced by A Tribe Called Quest and other hip hop artists for his latest batch of music. Of course, there's the presence of Shawn Chrystopher's flow in "Alligator Sky," but it's also apparent in songs like "Honey and the Bee," "Dreams Don't Turn To Dust" and "Kamikaze." It's more in the beat than anything else, but "Kamikaze" does also have some hip hop-ish synth, as well as some relaxed turntable scratches. Interestingly, "Kamikaze" also seems to have some Mae influence as well, mostly in the vocals. Other songs do bear a Mae resemblance in the music though, such as in "Deer in the Headlights," but it does keep the Owl City poppiness with the piano and addicting synthesizers.

As a whole, though Young experiments with these new sounds and styles, All Things Bright and Beautiful is still an Owl City album. Take a look at the song "Galaxies," which is already a fan favorite of these new tracks thanks to early streams and leaks on the internet; the synth and the overall dance vibe of the song has Owl City written all over it. "Honey and the Bee," although touched with the hip hop groove, features an entire verse (and a couple lines in the chorus) from Owl City live bandmember, Breanne Düren, who was also involved in a few songs on Ocean Eyes. Later in the album, it almost sounds like Düren makes a second appearance in "Yacht Club," but it's actually solo singer Valerie Poxleitner (more commonly known as Lights). The two haven't done much work together, but Young has done a remix for Lights' hit single "Saviour," so the two working together for All Things... doesn't come as much of a surprise. "Yacht Club" is another dreamy dance song, with almost a house music style in the chorus.

As for the lyrics, one of the common themes is outer space. Obviously the track "Galaxies" falls into this theme. The preceding track, "January 28, 1986," uses a vocal melody from "Galaxies" in the background with a portion of audio from the speech Ronald Reagan gave after the explosion of the Space Shuttle Challenger -- not a sad portion, but rather a part that gave a proper goodbye to the crew, and a respect for their lives. "Angels" also makes reference to space, saying "Among my frivolous thoughts, I believe there are beautiful things seen by the astronauts," but is mostly just about the beauty of our surroundings, and that there are angels all around us ("So if you're dying to see, I guarantee there are angels around your vicinity"). Young also makes more references to God and his faith on this record. The mentioning of angels, as well as the shout of "Wake me if You're out there!" in "Angels" is one such instance. The radio single, "Galaxies," says "Dear God I was terribly lost when the galaxies crossed and the sun went dark, but dear God You're the only north star I would follow this far." Young also sings "He is the saving grace of the galaxies" near the end of the song. For those who enjoy Young's quirky and silly songs, like "Rugs From Me To You" and "Dental Care," you'll find yourself really getting into the upbeat "Deer in the Headlights." It's about meeting a girl, falling in love, and not being good enough for her (the beginning is rather funny - "Met a girl with a graceful charm, and all I did was say hello, her pepper spray made it rather hard for me to walk her home, but I guess that's the way it goes"). Young's maturity shows a lot, but he still manages to make his music fun and very accessible, and he never sacrifices who he is or his creativity to develop his craft.

Owl City is one of those projects that is able to charm the heck out of pop music fans who listen to almost anything, but also gain the respect of authentic music fans who yearn for high quality tunes. However, there are also those who just can't call themselves fans due to Owl City's pop hooks and extreme accessibility. I just can't help but feel like the music Young creates under this moniker is definitely worthy of listeners' respect. Owl City is one of the best things pop radio has going for it, and I would venture to say that All Things Bright and Beautiful will take the position of 2011's best pop album. If Owl City had you at Ocean Eyes, he'll most likely make permanent residence in your heart when you get your hands on a copy of All Things Bright and Beautiful.

With Ocean Eyes now in the rearview mirror, developing another project to its caliber would seem to be impossible. All Things... proves that wrong. The genius aspects of Owl City, aka Adam Young, are not only the catchy hooks and extensive metaphorical imagery, but also the way in which a new listening experience is captured for every track while still maintaining the distinctive sound that defines Owl City as a whole. The level of creativity found on this record is unbelievable (what other band could call their first single "Alligator Sky" and get away with it?), and it's a force to be reckoned with. Tracks like "Honey and the Bee" and "Deer in the Headlights" continue the band's ever-optimistic outlook on love, giving a similar, yet entirely different approach from tracks like "The Saltwater Room" on Ocean Eyes. "Kamikaze," a love-it or hate-it track, is so drastically different from anything Owl City has given us before that it's hard to know what to make of it, while "Angels" shows off a unique vocal side of Adam that hasn't been heard on any previous material. The candidly spiritual "Galaxies" (For He is the saving grace of the galaxies), which might be the overall highlight of the album, features an intro from the late President Reagan, and the elusive vocals from fellow synth/pop artist Lights are a welcome feature in "The Yacht Club." All Things... closes with the Matt Thiessen co-penned "Plant Life," a quirky track that only adds to what is a near-perfect record. To ignore this project would be foolish, because there's something for everyone here. Well done, Mr. Young. - Logan Leasure, 6/11/11
class="coversize" align=right> Early Thoughts...

In recent years, few albums have been as breathtaking as the Universal Records debut from Owl City, Ocean Eyes. Lone member, Adam Young, found a way to mesh radio-friendly pop with gorgeous melodies and beautiful landscapes of music. Needless to say, almost the entire world flipped when Young announced his official sophomore album, All Things Bright and Beautiful. After months of Young highlighting the immense amount of work he was doing for the recording and production of the album, high expectations began to mount, and after a single full listen, it seems that they've been met. Several more listens later, and it's greatness almost smacks you in the face. The Owl City sound we know and love is still prevalent, but Young has also brought a more mature sound to the album as well. He's also brought in some new sounds - sounds influenced by indie rock bands and hip hop groups. It's much more eclectic, and a bit more spiritual, without sacrificing the integrity of the music. If you liked Ocean Eyes, be prepared to fall in love with All Things Bright and Beautiful. There's no question that you should get into one of the pre-order options available on the official Owl City website. June 14 just can't come soon enough... - PReview date: 4/2/11, written by Scott Fryberger of Jesusfreakhideout.com --->