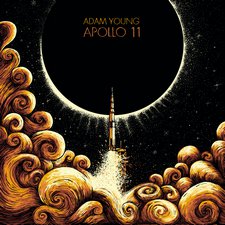 
As if Adam Young didn't have enough creative outlets, in January the Owl City mastermind announced he would launch a new project called "Adam Young Scores." Young plans to release one score on the first of every month based on stories that have inspired him. Apollo 11 is a triumphant introduction to this ambitious series, instrumentally telling the story of the first manned lunar landing.

A successful film score captures and enriches the emotions being communicated through a movie script. Young's interpretation of the story of Apollo 11 mission does exactly that. The atmospheres Young creates with full orchestra sounds and electric guitars explore the feelings of wonder and awe one might associate with such monumental moments for this mission--the excitement of the launch, the intensity of the lunar landing, the gentleness of Neil Armstrong's famous first step. Even without the track names, most listeners will pick up on these focal points throughout the soundtrack. In addition to capturing the overall chain of events, there is craftsmanship in the details. Young ties the score together with repeated musical themes such as how deep electric guitar tones represent the time the astronauts spent travelling through space on "The Lonely Three" and "Return To Earth".

The more you listen to this 12 track project, the more you can tell it was a labor of love. Apollo 11 is moving piece of art that is sure to put you in a good mood. Given that it is being offered for free through Adam Young's website, there is no reason to pass up the opportunity to download this soundtrack.