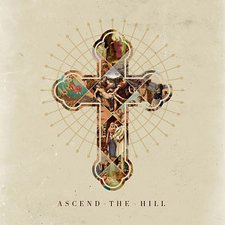 Formerly going by the name Joel Davis, Florida-based worship group Ascend the Hill became one of the first bands to join forces with Come&Live! and its founder Chad Johnson. Their self-titled album was first given away for free through NoiseTrade, and then became a permanent addition to the Come&Live! download page for anyone who wanted it. It's an indie music album that throws in touches of corporate worship and jam band musicianship and adds a load of heart, worship and humility.

The earlier songs on the tracklist tend to be the more enjoyable ones in my eyes. "Sing," "Joy" and "Love" are favorites, with catchy melodies, awesome guitar lines and lyrics that are both worshipful as well as well-thought-out. They have indie aspects as well as some pop rock. Later on in the album is a nice acoustic piece called "Love," and then a song called "Awake." At times, usually during the verses, "Awake" reminds me of bands like labelmates so long forgotten. The chorus is more poppy, but it still maintains a good rock vibe; the bridge is more akin to The Ember Days.

Ascend the Hill is a monster of an album; if it was eighteen seconds longer, it wouldn't fit onto a normal compact disc (which can hold eighty minutes). And there are only eleven tracks. That is to say, some of the songs tend to go on a little long. Most of the tracks are longer than six minutes, with the longest song, "Wind of God," clocking in at sixteen and a half minutes (although it does almost seem like two songs put together). From a music fan's perspective, the songs can be a bit wearisome. Though, if you can find yourself worshipping along with the band while this album plays, you can easily find yourself lost in the music while you worship, which is the full intent of the band writing such long and drawn-out material. It's a bit of a double-edged sword; these are long tracks that aren't great if you're merely listening, but they leave a lot of room for intimacy with Jesus if you're worshipping. At the same time, some of the songs, though bearing intimidating lengths, are still very enjoyable outside of the worship aspect, like "Sing" and the lengthy "Fall."

Ascend the Hill's debut album is not an album for everyone. It took me several listens before I began to really enjoy it, but some may find themselves not wanting to give it a second chance. If you can handle an album that is mostly slower worship music, or you just like any music that gives glory to Jesus, I'd recommend giving this one a listen. It's full of love, joy and hope in our Savior. You can support the band by buying it on Amazon or iTunes, but if you're not able to, it's still available for free at the Come&Live! website.