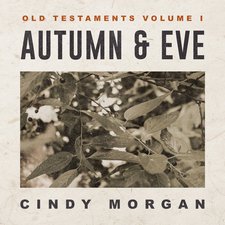 
A multi-decade veteran of CCM, Cindy Morgan has embarked on an ambitious five-part project of songs inspired by the stories of the Old Testament. The first EP, titled Autumn & Eve: Old Testament Volume 1, introduces listeners to a set of tunes firmly in the folk/Americana musical direction. This style fits her like a well worn glove, and is a great follow up to previous full-length album, 2015's Bows & Arrows. Her goal for this album was to write songs aimed at merging Old Testament struggles and modern heartache, and on that account she has nailed it. A few words that come to mind when listening through the EP are: Earthy. Simple. Haunting. Sparse. Warm. Nothing here is in a hurry, and Morgans strong and evocative voice is on full display.

A banjo pluck and light stomp beat kick off In The Beginning, as she earnestly starts the EP with the beginning of humanity singing, In The Beginning/we were all asleep/oh and the spirit was hovering over the deep. Later in the song, she is joined by a chorus of voices calling out little children/come to life, which adds a nice layer to the song without overwhelming her voice as the main feature. This happens again within the following song, West of Nod, as she lilts and lifts her vocals, with an assist from a cello, ultimately to be joined by well placed male and female harmonies. In addition, Dear Life soars vocally while remaining firmly grounded in its sparse instrumentation.

Another highlight is lead single Weight, which carries with it a haunting heaviness. There is a space maintained throughout that allows the song to express lament, without wallowing in hopelessness. Also recommended is the accompanying lyric video that further communicates the melancholy. Her weariness is palpable as she asks the question, why is it so hard/to touch the sky/with the weight of the world? Perhaps most like her piano/pop work of many previous projects, ballad Like David is another standout offering. Sounding as if it had been written during a late night on the back porch as the crickets joined in, it is achingly beautiful. The harmonies weave in and out of each other as they sing, Like David/like David/swimming in the water deep/sometimes the storm comes silently/Its hard to know the words to pray/I guess you know them anyway. This reviewer's preference would have been to end this standout EP here, but a short reprise of In The Beginning wraps things up where they began, and its a small quibble on a fantastic release.

Autumn & Eve Has whet the appetite of this longtime listener who cannot wait to hear the subsequent projects by an artist at the top of her game. Cindy Morgan still has much to say, and fans of folk/Americana, and master-craft songwriting, would do well to give this one your full attention.

Music can have an amazing ability to temporarily transport someone to another place and time -- to feel emotions both familiar and foreign to ones own experiences. On Autumn & Eve - Old Testament Volume 1, Morgan expertly uses low-key instrumentation and enrapturing vocals to set the listener embarking on such a journey. Best listened to in a manner that allows for the sparseness of the soundscape to truly shine, this EP paints a beautiful and introspective picture of select points of Old Testament history. Perfectly placed harmonies over various stringed set pieces entice and remain with the listener. Wistful and haunting melodies combine to create an atmosphere thick with world weariness. Volume 1 is an excellent release that deserves to be absorbed and enjoyed while we wait on the next installment. - 3/6/19 Michael Knipp