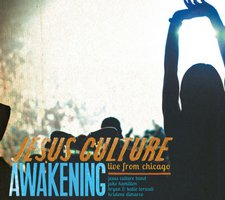 Approaching Jesus Culture's latest musical offering Awakening: Live From Chicago for review, I knew that it could go either of two ways. It would either be a phenomenal, unique and inspiring album filled with powerful vocals and lyrics, or it would be like every other live worship recording I have listened to in the past five years (in other words, a recording you can tune out to while taking a short road trip to work and back). After listening to the two disc set recorded live in Chicago at Jesus Culture's first three-day arena rally, I can say that it leans more towards the latter. However, there are some outstanding tracks on the album which give listeners more than a hint of the talent within the Jesus Culture band.

Even though this is a live recording, Jesus Culture covers only four songs from their previous releases. This creates the sense of an entirely new release as opposed a revamped version of their preceding album, Come Away. Yet, despite this collection of primarily new songs, they come across sounding verysimilar. The electric guitar riffs and soaring vocals found in so many of the songs certainly create a sense of excitement and an atmosphere for worship, but they also make Awakening: Live from Chicago sound like every other worship album.

The presence of Kristene Dimarco's vocals on "Break Every Chain" is a shining moment. The track stands out as her vocals, combined with the repetitive "There is power in the name of Jesus/To break every chain" interweave to create a beautiful piece solely reminding the listener of God's power. The absence of excessive instrumentation until Dimarco reaches the crescendo aids in this song being a climax on the somewhat mundane release. "Perfect Love" and "I Surrender" also stand out simply due to Kim Walker-Smith's powerful vocals. Add to this the cover of the hymn "Nothing But the Blood," by Chris Quilala, and you realize that there are gems within this record that will leave you breathless.

Oddly enough, there is an electronica edge to many of the Jesus Cultures songs, especially in "Father of Lights," "Glorious" and "Dance." This does make the recording somewhat unique. However, it often overwhelms many of the honest and raw lyrics found in the songs. It is in this seemingly unbalanced music-to-lyric ratio that Awakening: Live from Chicago sounds like every other contemporary church release. Often, the lead vocalists are competing with the sheer intensity of the music in order to get their message across, and sadly no matter how remarkable their vocals are, they cannot win.

If you are a fan of Jesus Culture and love to worship, you will enjoy Awakening. It certainly displays the musical capabilities of the band along with a very overt sense of passion for the LORD and worshiping him. But if you want to hear unique worship music that awes you from the moment you press play to the last track, then pass this one up. Chances are you have a similar album in your collection already.