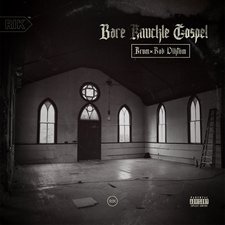 
In 1998, the independent hip hop circuit got their first glimpse of an up-and-coming Texan rapper who went by the name Playdough. Alongside Blake Knight, the duo known as ill harmonics quickly got signed to Uprok Records, where Playdough's solo career also got started. After one album, he jumped over to 7 Spin Music for another one, and has since been back in the independent scene releasing music on a continual basis. The Lord has been good to Playdough and his career, and the emcee has been blessed with a fanbase that sticks with him through thick and thin...even a name change almost twenty years into it all.

In early 2016, Playdough announced that, "under the advice of legal counsel," he would be rebranding himself, and would thenceforth be known as Krum. Wasting no time at all, Krum is already capitalizing on this new momentum by dropping a brand new album into our laps. Teaming up with producer extraordinaire Rob Viktum, Krum is bringing Bare Knuckle Gospel to the table, and it's free. It's so free that you don't even have an option to buy it; it's exclusively on the Rappers I Know Bandcamp page.

The great thing about this album is that the usage of the word "gospel" is twofold: you've got plenty of the Gospel, aka the good news of Jesus Christ, and you've also got plenty of the gospel genre of music. Rob Viktum made all the beats on this album from old school gospel records, giving each track a lot of heart and soul, with a little blues thrown in for good measure. Viktum's work shines bright, with greatness abounding; the vocal samples in "Merci" are some of my favorite, but I also dig the soulfulness in the samples of "Before the Monsters Came" and "Abraham's Nephew's Wife." The production is also raw, with vinyl pops and some fuzz present on these tracks. It's honestly just nothing short of amazing production and beatmaking that fits Krum's style perfectly and begs the question: Why am I not more familiar with Rob Viktum's work? That'll probably change after this.

Now, I feel I should point out something to those who may notice something peculiar about the artwork. There is indeed a "parental advisory: explicit content" label on this album. However, to put any fears to rest for those who think Krum may have changed in that regard, he did clear it up on a somewhat recent Periscope broadcast. He's using "explicit" in the context of the dictionary definition: "stated clearly and in detail, leaving no room for confusion or doubt." For those still wondering, this album is clean, though there is one song that starts with Krum saying "Jesus told me I'm the...," which ends without using any language, and only serves as imagery for the following line or two. But the album is still clean.

On the contrary, this is one of Krum's most spiritual albums yet. Though he's always been really open about his faith over and above the party time aspect of his music, Bare Knuckle Gospel feels more focused and concentrated on the spiritual side of life. "Genesis" begins with Krum admitting about sometimes feeling like he's lost, but also makes mention of being able to hear the good news anywhere and remembering who he is in the Lord. He delves in further on this topic in "Grandma's Prayer," using real examples from his own grandma, who has served Krum over the years as a prayer warrior and a source of encouragement when he's feeling down. "Nineveh" uses imagery from both the book of Jonah as well as the message of Jesus, while "Abraham's Nephew's Wife" uses the story of Lot's wife turning into a pillar of salt to talk about not looking back on the things God has brought you through.

One of my favorite tracks is "Merci," which serves personal thank you from Krum to not only his Savior but also to his fans. In fact, he gives his fans (his "Road Dogs") a full verse's worth of shout-outs for continuing to support him by picking up the music and merchandise and also by sending prayers and words of encouragement over the years. It's a touching song, and it's great to see an artist be so humble and acknowledging of his fans.

With the transition from Playdough to Krum being complete (he recently did his last performance as Playdough), he's relying on his friends and fans to help get the word out and keep his momentum going. Putting out a free album is a great way to keep it going, and the fact that it's among the best in his career makes it even sweeter. Don't waste another minute without getting this album, and make sure you get familiar with Rob Viktum's other production work as well. Great things are in store for Krum!